No more postings on this site until I return to London... Assuming I am allowed to return! In the meantime my blog is at http://paulincognito.blogspot.com. Thanks for reading...
Read more...

November 10, 2005
One thing I didn't miss was the National Gallery latest blockbuster Rubens – A master in the making. I caught it yesterday evening. It is a collection of his earliest works and a great show indicating how his style developed and evolved. There are some very dramatic paintings including the recently discovered "lost Rubens" that sold for £45million in 2001. The way the paintings are displayed is a tad shambolic and suggests they were a little rushed in putting it all together but it was a great early evening diversion. 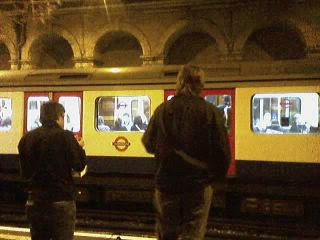 Scenes from Paddington tube Wednesday 18:39 - Lard-arses waiting for the tube with a box of Krispy Kremes...
Read more...

November 10, 2005
As it turns out, today is my last day in London. Tonight I fly back to Australia. Whether this is a permanent arrangement or a temporary one I will find out in a couple of weeks, so it is probably worth making a list of…

Things I will miss (in no particular order):
The weather. It has been fine and mild, and as the leaves are now starting to fall it looks all rather pleasant. I will be returning to Australia (Brisbane in particular) where it is hot, sticky and glaringly bright. When I tell English people about this they look at me and say "Oh yes I can see how you just can't stand the prospect of returning…"
Public transport that sort of works. Actually even with its problems it is still by far the most civilised public transport I have encountered in all my travels.
The parks the greenery and all that goes with that
British Television. Series three of Little Britain is about to commence. Darn.
Marks and Spencer food. By far the most edible and doesn't taste like they mad…
Read more...
November 09, 2005 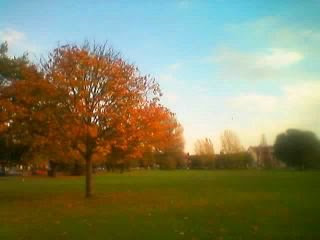 November 09, 2005
On Monday evening I caught the play Glorious, which is playing at the Duchess Theatre in Covent Garden. The play is based on the last year in the life of Florence Foster Jenkins. Florence Foster Jenkins was a rich woman who staged her own opera recitals in New York in the 1940s. The only problem with that was that she was tone deaf. She also made records of her performances and her album of butchered arias is no doubt the reason for her lasting appeal and the reason this play was made.

Maureen Lipman starred in the title role and was quite hilarious. It was quite amusing watching her antics and the highlight definitely was her recreation of the "Queen of the Night Aria" from the Magic Flute. Florence on record sounded like a strangled Chihuahua and Lipman equally rises to the challenge. She isn't singing Oklahoma here…

In her recitals Florence put on some rather extravagant costumes (that she made herself) and threw flowers out at the audience. She often got so carried a…
Read more...
November 07, 2005 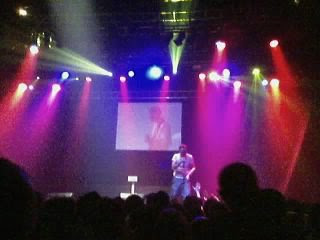 Scenes from G-A-Y at the Astoria Sunday 02:08. Jason Donnovan singing live. The photo can't capture the horror a gaunt, aged poxy-ridden (he had some sort of flu) man he actually was. Guess those years of class A drugs took their toll... The punters loved Jason, but I think I was too sober to get into that. Oh to be at the Astoria on the wrong night. In two weeks time Madge will be there performing live to plug her new album release "Confessions on A Dance Floor"... Timing is everything...
Read more...
November 06, 2005
Theatre: Macbeth and the night of woodies

On Friday evening I caught the opportunity to see the travelling production of Macbeth at the Almedia. It was a one-man version of the show starring Stephen Dillane (he starred opposite Nicole in The Hours). Alas it wasn't the most interesting of shows to see. The words pretentious and rubbish come to mind when describing it. You have to hand it to a director who manages to strip all the nuances and power from a story and just leave you there trying to work out what's going on while an actor changes voice, speaks in French at times (a French lady Macbeth anyone – ooh la lah!), and fights to be heard above music screeches that were composed specifically for this production.

It is the sort of show however that some people have loved, and its short run is practically sold out. I wondered how some of the audience managed to applaud after 100 minutes of squirming and restlessness. I didn't. It was the first time since seeing the English …
Read more...

November 04, 2005
I knew it was going to be a bit of a treat last night when Renée Fleming walked on stage in a sensational Vivienne Westwood gown and the audience at the Barbican started cheering and carrying on. This was even before she sung a note. As she would later tell us during the course of the evening that the programme was something she was trying out with pianist Hartmut Höll and there really was something for everyone in it and everyone seemed to be enjoying themselves – especially Renée.

The recital in the first half consisted of songs by Purcell and George Crumb. Fleming gave some background on why Crumb was a particular favourite of hers, noting that while as a composer he wrote rather dark moody music, in real life he is such an unassuming character he offered to fix a neighbours lawn mower (so there!). André Previn, Alban Berg and Schumann completed the second half and by the end of it all the audience was completely taken by her. It was what the punters had come for. And she is such an…
Read more...

Overheard at the gym...

November 03, 2005
Last night the first episode of the new series on Rome aired so I was among the 6.6million people who tuned in to watch it. After a few minutes of viewing I couldn't help but think that for a show about Rome there were an awful lot of maps of Tasmania on display. Getting past the beaver and buttock shots (which were interspersed amongst gore galore – which in retrospect was an inappropriate time to be eating lasagne) there was some sort of story, which potentially could be quite interesting over the next ten weeks, but I think the story isn't the drawcard here. Get the punters in by having freshly sacrificed bovine blood rubbed over Atia's tits is the drawcard. As fascinating as all that is it just isn't as fun as A Funny Thing Happened on the Way to the Forum…
Read more...

Geography: out and about...

November 03, 2005
There is a north / south divide between Londoners, which is silly really as there are crap parts of London both north and south of the Thames. Only the other day I was taunting somebody in NW London over their local unisex sauna that they described was where you could pick up an Eastern European sex slave. Welcome to the new Europe.

In SW2 where I am now located there isn't much of that. Although on the weekend a strange man (who was not local) knocked on the door and asked if A would mind "holding his things" for a little while… Apart from that it is a nice quiet street, in easy walking distance to Balham and Streatham Hill, although personally I prefer the extra walk to Balham than Streatham Hill which has to have one of the crappiest high streets in Britain.

Well this arrangement is temporary and depending on the outcome of a few things my location will change quite drastically in the next week or so…
Read more...

November 03, 2005
Yesterday I caught the Diane Arbus photography retrospective at the V&A. It was quite an amazing and fairly extensive exhibition of her work. Arbus was famous for her photographs mostly shot in New York from the sixties up until her suicide in 1971. The exhibition originated in San Francisco MOMA and at the moment you can't go anywhere on the tube without the V&A's ad for the show featuring an Arbus photo of a drag queen holding a cigarette, mouth partly open and hair in rollers. Don't know if that sort of imagery will bring the punters in but it certainly grabs your attention underground…

At the exhibition there were quite a lot of photographs to get through in the hour I set aside to see it. The exhibition also included letters, proofs and other paraphernalia relating to her life and gave some insight into the inspiration for her photographs of eccentric yet everyday scenes. You don't get much of a sense of why she may have killed herself at the age of 48 (alt…
Read more...
More posts