Showing posts from September, 2008
Show All

It helps to pull ones weight...

Sent from my iPhonePosted by email from paulinlondon's posterous
Read more...

It had been a while since I had been to the theatre, and so Felicity and I caught Afroreggae's Favelization concert at the Barbican on Thursday evening. Afroreggae have played at the Barbican a few times over the past few years, but this is the first time I caught them. Afroreggae began in Brazil in the shantytowns (favelas) and the music is a fusion of reggae, hip hop, soul, pop and latin rhythms. In addition to this the music also is a call to action about many of the injustices in the world, particularly among the world's poor and disenfranchised.

Of course being in Portugeuse this was lost on me. I checked with Felicity and she was a little rusty on it too. I guess most of the audience may have been in the same boat. While there were projections that accompanied the show the rapid fire words deserved to be comprehended. So after making a mental note to add language course to my new years resolutions, I could sit back and enjoy the concert. It was interesting that despite th…
Read more... 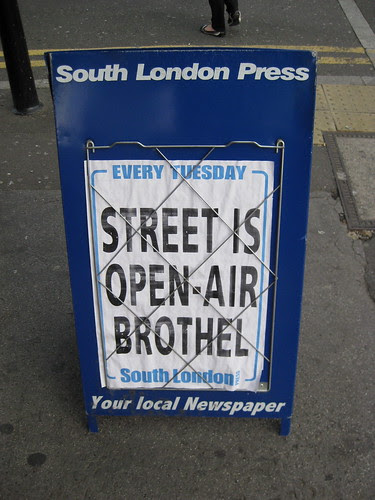 doggers delight, originally uploaded by red5standingby. A local candidate is even promising to arrive on scene and disrupt the goings on... Ron Davies should have thought about that as an excuse rather than badgers...
Read more...

Rehearsals for the Christmas concert were progressing as normal as could be expected and then Sasha whipped out his fish...Posted by email from paulinlondon's posterous
Read more... 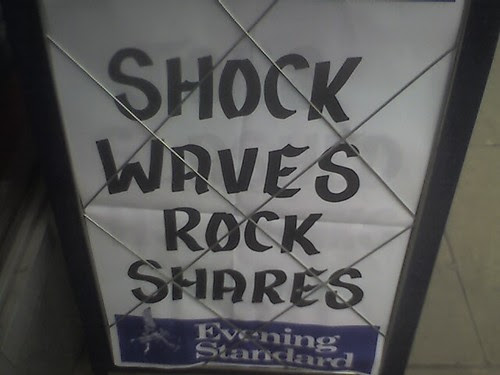 I wasn't quite sure what to expect from seeing 365. It played at the Edinburgh Festival to some very positive reviews, but a two hour play about children in care taking their first steps to independence seemed like an unusual way to spend a Saturday evening at the theatre. Since it was based in Scotland I dragged fellow chorister Stephen to see it since he was from Glasgow and I figured he could help with the translation (well of the accents anyway). I was hoping I would get away with nudging him and asking from time to time "Wha-did-he-say? Wha-did-he-say??" This sort of worked...

The play unfolds telling the stories of a group of children who pass through a "practice flat" as they gain their first steps to living independently and... adulthood. There is much scope for dream-like sequences, music and movement and these appear throughout and help make what could be a depressing subject a little more insightful and dare I say it... Even entertaining.

While at near…
Read more...

Rehearsals: The view from the back

The first rehearsals for the London Gay Men's Chorus started Monday evening... And it was a packed house... The concerts are at Cadogan Hall on December 19 and 20.Posted by email from paulinlondon's posterous
Read more...

Amongst the debris, there is some interesting street art...Posted by email from paulinlondon's posterous
Read more...

Is this the end of the Caped Crusader?, originally uploaded by paulbrannan. Holy W7 Batman...
Read more...

Sights: On the underground

Down in the underground, you'll find someone true... Down underground... Posted by email from paulinlondon's posterous
Read more...

The men are workin' it...Posted by email from paulinlondon's posterous
Read more...

Theatre: Joan Rivers A Work In Progress by a Life in Progress

I asked my friend Adam if he wanted to see Joan Rivers in her show and his response (in his best Joan voice) was, "Doo eye??? Doo eye ever???" Such is the pull of Joan Rivers with gay men. They love her. Can't get enough of her. Well, it was a silly question for me to ask.

So there we were on Wednesday night in the Leicester Square Theatre watching her new show. The show is part drama, part autobiography, and part stand up routine and it is great from start to finish. Joan doesn't quite look like she does in the picture when she first walks on, but that is part of the story as well. Being Joan Rivers she doesn't hold back talking about ageing. And she goes into every detail about things that drop...

I always love a filthy mouth and as Joan herself says (to paraphrase of course as I was laughing too much to really note the line), "When you reach 75 why can't you say motherfucker if it gives you enjoyment?" Well she says a lot more than that during th…
Read more...

At the theatre: joan rivers

She was gorgeous, great and at 75 still getting a great reaction from the audience... And when she didn't she told us what a lousy audience we were... Memorable moments included pointing out what a dump the west end is... Well those paving bricks look like they have been there for a while... More later...Posted by email from paulinlondon's posterous
Read more...

Trends in London this week...

I don't know about you, but I can't wait to piss on the high street...Posted by email from paulinlondon's posterous
Read more...
More posts