Showing posts from May, 2012
Show All

A bit of syncopation and history: Ragtime

Ragtime the musical is currently playing at Regent's Park Open Air Theatre . It's an epic musical based on E.L. Doctorow's novel that charts the tale of three families against the backdrop of the change, family, immigration, racism, strikes and unrest at the turn of the last century in America. It's an exhausting and exhilarating history lesson set to the music of ragtime, a genre of music that is predominantly recognisable for its syncopated rhythms. It was popular during the period, but then eclipsed by jazz and largely forgotten until a 1970s revival . Of course it is neither the period nor the music that hits you first when you take your seats. The first shock is that the set which looks like a bomb has gone off. And for a story set in 1906 it all seems very contemporary. There is a poster from Obama's 2008 campaign proclaiming "Dare to Dream" towards the back with a gaping hole in it. In front of the hole is a pile of junk, dust and rubbish as if ha
Read more...

The night that was: At the theatre with Love Bites

Sunday night was an opportunity to catch a series of short one act plays - or as @johnnyfoxlondon and I liked to call them in the Audioboo below, snatches - at the Southwark Playhouse called Love Bites . It was one night only which was a shame as it was a lot of fun could do with running over a few Sunday nights for when people are looking for something strange and interesting to do. The concept has been running for a few years and has produced over thirty new one-act plays. But this was my first Love Bites, which also was also a best of collection of the material so far. Some are self-contained stories, some are monologues and some could potentially be other stories. It is a great little concept that is simple and very entertaining. The writing was great and the works presented had something funny to say about the art of love. There were also a few surprises in store in some of the pieces. But best of all is the opportunity to see new work being tried out in a simple yet slick
Read more...

Plays on tour: Is there a (script) doctor in the house?

May 23, 2012
Doctor in the House has been doing the rounds of major centres this year and is playing at Richmond Theatre this week. Comedian and I'm a Celebrity Get Me Out of Here winner Joe Pasquale plays the lead but he does not quite get the opportunity to let rip as much as you think you think he could or would like to. It's less laugh out loud and more smirk occasionally. Very occasionally. The material has been reworked from its source material and it seems to be missing any sense of bawdiness and adventure that could have made this a bit more fun. Pasquale describes in the above clip that the show will make you come out of the theatre feeling like you had a little hot water bottle down your pants. Well there was a warm feeling in the theatre but it could have been due to the ambient temperatures outside. The cast try their best with the material they have, the set is lovely albeit a bit static since its the same awful med student accommodation in every scene (think Ladykillers of
Read more...

May 23, 2012
The London Wonderground on the South Bank is currently playing host to Cantina, an Australian circus production that is unique in its blend of theatre and physical performance with a lashings of pain. Actually, a lot of pain. Broken glass, high heels, broken limbs feature so prominently it could be billed as the Cirque De Sade if that wasn't already the name for a fetish night in Canada . The production manages to take the circus act and make it new by becoming sexy, violent and painful. Is it real or is it escapism? It is hard to tell but it is awfully enjoyable and classy night out full of laughs and some genuine surprises that will have audiences gasping.
Read more...

Feel it, smell it: Leather Forever

Burlington Gardens is the home for an intriguing and beautiful exhibition by Hermès called Leather Forever . It celebrates the art of making products with leather along with showcasing some of the beautiful products made by the company over its 175 years. There is the opportunity to feel and smell different leathers and watch the craftmanship in action working with the material. With a mix of lighting effects and different set pieces to compliment their range of products, it is at times an interactive experience and there is even a moment when you can be caught in a leather curtain. A lovely diversion that will have you wanting to head to the gift shop... If you know there is one just around the corner ... The Leather Forever exhibition is open from 10am to 6pm daily and admission is free. It runs through to 27 May.
Read more... 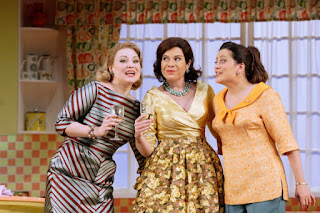 The Royal Opera's updated production of Verdi's Falstaff received mixed reviews from the audience on Tuesday night. Most people loved the performances, but when it was time for the production team to head onstage, there were some very audible boos (not to be confused with Audioboos ). The gentleman next to me booed. He had had been tut tutting throughout most of the opera (particularly as the curtain went up revealing a dazzlingly bright 1950s kitchen in the second act), so it probably was not a surprise, but he did it with such gusto the sound reverberated around. It is great that so many people are so passionate about Falstaff. It's a wonderful opera about a man who gets his comeuppance. While the production does update the setting from Elizabethan England to 1950s England, for the most part this change does not get in the way of the proceedings. The final scene in the second act in that kitchen was a little clunky and mistimed so much that it was obvious to most of
Read more...

Dusk in a muddy park: Babel

Babel , billed as one of the theatrical events of 2012 (in a year that no doubt will be full of these) is currently playing at Caledonian Park in North London. It's part street theatre, part performance art, part art and craft, part singing and part muddy field. It's a lot of parts but it is a pretty ambitious piece that brings together a story of a city like London where people are from all corners of the world and representing a variety of cultures and backgrounds...
Read more...

The generation gap as an overlong play: Love, Love, Love

May 02, 2012
Love, Love, Love by Mike Bartlett is now playing at the Royal Court . It's an epic drama about Kenneth and Sandra who meet in the sixties and start a fiery relationship. They have two children, divorce and then retire. But all is not well and it is the harsh economic realities that become the focus of the play. It has some sort of impact as people were filing out of the theatre Saturday night muttering amongst themselves, "Oh well, we will have to buy our children a house" or "I'm never going to be able to afford to buy on my salary". A play that tackles the theme of the baby boomer generation as the locust generation is an interesting premise. But at three hours you will leave the theatre wondering if they could have made it shorter and called it Love, Love. As one particularly loud American couple noted in the foyer after the first act, it was fifty minutes that could have been told in five. The characters and more caricatures and there are no real s
Read more...
More posts