Showing posts from March, 2011
Show All

March 15, 2011
It is always good fun introducing non-Australians to the background of the country with the rock, the opera house and the reef . Before a few of us settled in to watch the final performance of The Sapphires at the Barbican I explained that in 1967 there was a referendum where the people of Australia agreed to give the federal government power to formulate laws over Aboriginal people. Previously they were excluded from things such as the census, and the constitution did not allow for the federal government to make laws specifically for Aboriginal people. Surprisingly the programme notes of the show get it wrong and incorrectly refer this to full citizenship rights, but I guess the above description is a bit long-winded and its arguable the referendum was also seen as a symbolic gesture which led eventually led to greater rights. Against this backdrop is the story of The Sapphires and inspired by writer Tony Briggs's mother and her cousins, who toured Vietnam in 1968 to perfo
Read more...

I saw Buried Child at the National Theatre in 2004 and thought it was hilarious. The version I saw on Friday at Upstairs at the Gatehouse turned out to be less so. It probably did not help making a mad dash from south London to be there and finding severe delays impacting my journey, but I have been to the Gatehouse enough times to not be too bothered by that, particularly when the performances are good. This is a play that challenges the American dream, highlights the poverty of rural life in America and looks at the breakdown of family values. These topics have been in plenty of plays, but here they are presented in a brutally honest way that alternates between the real and surreal. You often need to read between the lines to understand what is going on.
Read more... 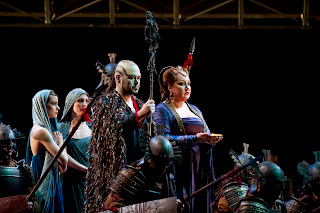 I couldn't pass up the chance to see David McVicar's production of Aida at the Royal Opera on Tuesday. I liked the first time around so an invitation to see the dress rehearsal with a few other bloggers seemed like an awfully sensible way to spend a Tuesday morning. After getting past the crowd of old age pensioners and students that seemed to make up this preview audience (and they are a tough crowd - well the pensioners anyway - steer clear of their elbows), having a strong cup of coffee, we settled down in our seats to watch the drama unfold. Johnnyfox and I were given the choice of the stalls or a box. We opted for the director's box. There is something thrilling about this production of the opera that lingers with you. It is alternatively bloody and sexual, but never feels out of place or over the top as Aida productions can tend to be. Instead there is an intimacy that draws you in to the central characters and recurring themes of war and love. War comes first,
Read more...

Friday night was an opportunity to catch My Beautiful Laundrette, which is playing at Above The Stag  at Victoria. This adaptation of the film is briskly paced and well acted by the ensemble, particularly the two leads - Yannick Fernandes and James Wallwork - who are totally convincing as Omar and Johnny. The drama unfolds on a set that feels like you are watching a game of tennis (not to mention having to see some gratuitous graffiti... This toned down adaptation of the film doesn't extend to the set). But getting past the twisted necks, there is a heart to the story of two boys in eighties London who meet again after leaving school. And one is a skinhead. And the other is setting up a laundromat. This production will have you strangely nostalgic for the eighties, which may be the result of the sweeter tone the play strikes over the film... And the fact it is a mildly retro location of the Stag helps too... You can smell the eighties the minute you walk into the venue (althoug
Read more...
More posts