Showing posts from December, 2007
Show All

Scenes from a kitchen at Christmas (early preparations)

Christmas 2007 , originally uploaded by Paul-in-London . I could have written about the concerts I saw this week which included Cecilia Bartoli with a slight cold yodelling in tribute to early 19th-century diva Maria Malibran, or about the five hours of Wagner I sat through in a coma on Friday (mental note: Parsifal isn't my cup of tea), but anyway, I thought this was far more appropriate for Christmas day...
Read more...

Overheard at the midnight Eucharist... 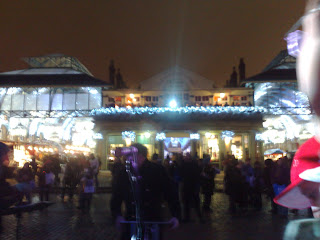 After the Accentuate the Positive concert with the LGMC the opportunity arose this week to freeze one's ass (or arse) off in the Covent Garden Piazza singing Christmas carols. Have made mental note to always wear thermals in future, but it was a great way of getting into the festive spirit. And with the mulled wine and hot cider on offer in the square, it helped to keep warm and add to the heartiness of the singing... Tuesday night's carols were quite eventful with one very straight drunk wanting to join the chorus and no security in sight. His mates were looking on laughing as he pushed his way in through to the front. He got through a full verse of Hark the Herald Angels sing before security finally realised he wasn't part of the tenor 1's. He was dragged out wailing he "jushwannadooshing". They weren't messing about the second time while we were singing ABBA's "Happy New Year". Some drunk queen in a long coat and scarf stopped and stood
Read more... 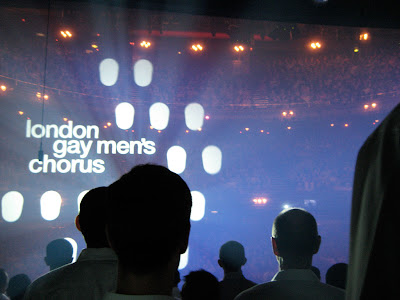 Before the curtain rises (or rather the gauze) on what became a rather memorable show, a choir waits for its cue and a full house waits for the show to begin. After nine weeks of rehearsals it was show time. But the concert felt less of a show and more of a gathering of family and friends. A gathering that just happened to take place at the Palladium , where Judy, Liza, Barbara, Frank, Rufus and Jason Donovan have previously performed... To name a few... Throughout what turned out to be a long day with much waiting around, in our spare time one tried not to gawk too much at the Judy Garland memorials both front and backstage, nor did I linger too much around Connie Fisher's dressing room (although I was informed to see Sound of Music before she leaves as the replacements are rubbish). In every corner of the building there is a sense of history about the theatre, although when you get to the bar you tend to forget all that when you are being charged £7 for a G&T... True Colours
Read more...

15-12-2007 , originally uploaded by Paul-in-London . Supermarkets make a wonderful addition to any high street, particularly with their active frontages and contribution to an improved public realm...
Read more...

News this week in London

Evening Standard , originally uploaded by robinrimbaud . Well the homeless man did say to the star that he hadn't had a bite in ages...
Read more...

December 10, 2007
It had been a while since I had heard or seen Billy Budd live so this concert version at the Barbican with the LSO seemed like a good idea. And it was. Huge forces, excellent soloists and thrilling and dramatic score made it seem not necessary for all that staging and drama stuff. With such a large orchestra at hand one also felt like you were on the Indomitable as it swelled and subsided... It was all thrilling stuff and quite a treat, even if it started at 7pm which would have to be a rather annoying starting time leaving little time for dinner. But towards the end of Act two I was preoccupied with the added tension of Ian Bostridge's music stand teetering over the stage. He had been leaning over it, pushing on it, holding it with both hands as the drama dictated, and every time he did, the music stand moved closer and closer to the edge. By the finale, one leg was over the edge. If another went surely that would have made the evenings recording less than satisfactory. The
Read more...

December 09, 2007
After three evenings of rehearsals for next Sunday's concert (which was all a bit step, step, turn now what the hell are we supposed to be singing?), the thought of going to see something was a refreshing prospect, particularly with a titled Bitch Slapped by God at the Drill Hall. A "million Santa march" on Washington leading to Christmas being cancelled sounds like a great idea for an antidote to Christmas panto, but it was more of an ordeal to be endured. Perhaps it is a work in progress but I was just glad I didn't pay to see it. Still, there was mulled wine on offer at the end of it and the entourage of lesbians enjoyed it. Hopefully for the rest of the run there will be some revisions that take 30 minutes from it. Oh but the killing of the reindeer (and their reassembly) was my favourite part.
Read more...

Scenes from the Coliseum Sunday Afternoon

021220072920 , originally uploaded by Paul-in-London . It was Sunday evening around 10.30pm when I looked at my watch while waiting in the wings of the Coliseum and wondered what the hell I was doing there. Sure it was Barbara Cook's 80th Birthday concert. Sure she was great. Sure we were about to go on to sing two minutes in the finale chorus of Make Your Garden Grow... But after being there since 3pm it was a bit of a stretch. Well the concert didn't start at 3pm, it just felt like it did. Mind you there were more than just a few of us in the chorus that jumped at the chance to sing with Barbara Cook when asked a few months ago. Hell even if it was for just two minutes we were there. Some people in the chorus did ask "Who is Barbara Cook?" to which I replied "Wash your mouth". Well, in the four years I have been in London I have seen her perform twice and got her autograph but all that wasn't intentional. But she is one of the interpreters of
Read more...
More posts