Showing posts from January, 2008
Show All

You know you can't hide your roots... I always like to say that for some reason... But Saturday evening arriving at the Landor pub er Theatre to see Assassins I felt thoroughly un-Australian. There I was dressed for a night at the theatre (albeit fringe theatre in the same street as a raid on two crack dens the night before) to be surrounded at the bar by many, many pissed Australians in thongs (the flip-flop kind), singlets and shorts as if it really was January in oz. It was no surprise that amongst all this malarkey the Fosters was flowing rather smoothly. I took solace with the fact that I was at least wearing Aussiebums even if nobody else knew that. Well that was sort of disclosed later in the evening after inviting the West End Whingers and their friends back to my flat and forgetting that I had not yet put away all the washing... But anyway, after getting past the rowdy mob downstairs I settled in to watch the show armed with a G&T. Assassins is Sondheim's t
Read more...

RUDE , originally uploaded by the_moog . Not all bloggers in South West London are frightfully witty. Some are a few sandwiches short of a picnic. Perhaps even... pissweak? Never has such a piddling topic been elevated to such grand heights...
Read more...

Overheard on the Number 37 Bus Friday

Sweeney Todd , originally uploaded by fairytalecinema . Rather than wait until next Friday for it to come out, I went with Fraser and Mark to see Sweeney Todd Sunday evening in preview. Neither of them knew what to expect but felt somewhat reassured by the large number of gay men in the audience (or perhaps they were just cruising I couldn't tell once the lights went down). Sweeney Todd is a great musical. It is so well written and a great mix of comedy and horror. I have seen it at least twice including the recent John Doyle production (which seemed to somewhat influence the above poster artwork). None of the productions I have seen however were gory enough for my taste. So I was somewhat relived to be thoroughly disturbed by the blood and gore in this show. In fact, I can't remember ever seeing such a movie when you were rooting for a serial killer to stick it to the victim one more time... Blood flies, bodies crunch, it is disgusting, but in the context it all feels so
Read more...

News in Waltham Forrest This Week

News , originally uploaded by Mr Bizzle . Perhaps he was on a bender...
Read more...

Movies: No Country For Old Men

no_country_for_old_men , originally uploaded by Sky-Hunter . My friend Adam decided to see No Country For Old Men without me saying that watching it me would be an awful experience as I would be gasping for air and yelling out "fuck" all the time in the theatre. Well I really do get carried away with what gets put up on the big screen so I couldn't blame him. So instead I caught the film with Mandy, who doesn't mind my quirks in the theatre as much as she likes to munch on the noisiest snacks you can buy at the candy bar. Tonight it was chilli flavoured rice snacks. Anyway, both of us had long stressful days so nothing like an intensive taught thriller about a sociopath with a cattlegun to ease your nerves... Half way through the film Mandy hissed at me to be quiet because my deep breathing was disturbing her. Mind you, she had pulled her sweater almost over her head to avoid some scenes. It wasn't that it was particularly gruesome... But it was a particular
Read more... 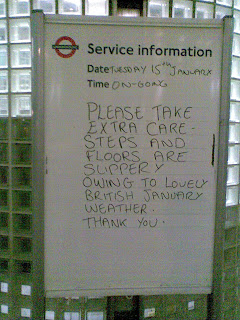 Overheard at the gym Saturday...

January 13, 2008
Tuesday night after digesting an unusual chicken curry meal, I was ready to see the Noël Coward play Present Laughter with Anna. We decided that rather than seeing it at the start of the run, a frightfully witty Coward play would be just the thing to keep those post-Christmas January blues away. What kept us entertained was not the acting or the witty script, but the thought that the show was going to be short. Oh how wrong we were. But we weren't the only ones. At the end of act one half the audience was in such a need of a drink they got up and headed to the exits only to be turned away... There was more to come. It wasn't until about 9pm did we get an intermission. By that time we both realised that coffee was more important than gin to get through the remaining ninety minutes. Ah yes, we were firmly in the realms of the National Theatre where every play gets the worthy treatment... Every pause is made to last... Every unnecessary addition (such as the radio announcement o
Read more...

Scenes from the National Theatre Bistro

Scenes from the National Theatre Bistro , originally uploaded by Paul-in-London . Before the theatre, one does need to get some food to eat, and the charming little food cafe at the National Theatre does a few small meals that simply taste as good as they look... It's chicken curry if you were wondering...
Read more...

Scenes from the East End Sunday

London - East End , originally uploaded by Paul-in-London . A rather specific requirement for models in a shop window...
Read more...

Movie: I'm Not There

January 03, 2008
Since Christmas it has been a chance to drink loads of champagne, sleep in and do very little. However before the holidays came to an end I did manage to catch the Bob Dylan movie I'm Not There . The film directed by Todd Haynes uses a number of actors to depict different periods of Dylan's life. Watching it and not knowing a great deal about Dylan's life except for that period where he went electric probably doesn't help, but it is a fascinating movie that probably gets better with repeated viewings. Cate Blanchett as Jude Quinn (electric / druggy Dylan) was particularly entertaining and who would have thought her hair was a perfect match for him at that period (even if it was not a wig)?
Read more...
More posts