Showing posts from October, 2009
Show All

October 22, 2009
An oddly shambolic concert took place at the Barbican tonight in what was supposed to be a show to highlight the music of Jaques Brel and his ongoing influence on musicians. Instead we had a band that drowned out the singers, half the singers sounding as if they had spent a bit too long at the bar, and a concert that looked and sounded like it needed to have a tech run and a rehearsal. Some people loved this show and obviously had an affinity to the performers. I suspect however they would have been happy for them to read from the phone book. It wasn't all bad either, but when half the performances were so inept, many of those who were more interested in the music of Brel voted with their feet and left at intermission. Some of us stayed to see if it got better, but only after a stiff drink at the bar... Part of what is amazing about Brel's music is its nuances and particularly its lyrics. But when you pump up the volume or get a performances that are just loud, noisy and ato
Read more...

October 22, 2009
In a week packed full of culture and goings on, Tuesday night's trip to the opera to see Ravel's L'Heure Espagnole and Puccini's Gianni Schicchi was a real treat. Well when giant cleavage greets you when you enter the theatre (it was on the curtain, not in the audience), you know it is going to be a bit of a fun evening. Both performances and productions were excellent. Director Richard Jones (who also is responsible for Annie Get Your Gun at the Young Vic) and revival director Elaine Kidd manage to keep it bright and brisk. The opera singers even managed to show not only could they act but they had great comic timing too. Ravel's piece is not so much an opera, so it was nice to have it paired with Puccini's often hilarious and over the top melodrama. The aria O mio babbino caro is from this piece and sung delicately by Maria Bengtsson. Holding it all together was a great performance by Thomas Allen in the title role. Worth catching and surprisingly not sold
Read more...

Open season on Brel at Barbican

Theatre: Mother Courage and her Children

After seeing a few low-spectacle shows (or no spectacle shows given the complete lack of imagination in the current Annie Get Your Gun), it was nice to see such a messy, grand epic production of Mother Courage and Her Children at the National Theatre last Wednesday. While I am not normally up for watching a three-hour play, there was so much to take in with this show that it was a hell of a journey worth taking. Fiona Shaw played Mother Courage in this production, who is a woman determined to make a living during the thirty years war (that was the war between 1618 and 1648) despite the consequences. Written by Bertolt Brecht in a new translation by Tony Kushner, the flavour of the story is influenced by recent events in the middle east. Things blow up, people die, songs are sung and all amongst it there is money to be made and a living to be made. There is nothing too subtle about this show but with some great songs by Duke Special , a great set by Tom Pye and an overall impressive
Read more...

Interval musings at the national

Theatre: Annie Get Your Gun 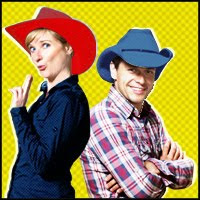 Previews have begun for a great new revival at the Young Vic of Annie Get Your Gun . The cast headed by Jane Horrocks and Julian Ovenden are sensational and there is some very fine singing and dancing happening on stage. I suspect with such a great cast and a lively interpretation of this old show it is going to be a big hit for them. Ovenden and Horrocks together show a great chemistry and give this show a lot of class... My only quibbles with it would be four piano's don't always do this music justice (or did they sound particularly great all the time on Saturday night)... And no matter how you put it... The set is just hideously awful. It almost detracts from the show as you feel like you're watching the show through a letterbox. Despite what the Young Vic's website says, if you are sitting on the left hand side (and particularly upstair) you are not going to have a good view (unless they fix it over the next few days). And during the opening Act 2 film montage
Read more...

The opportunity arose on Friday evening to see the new play The Author at the Royal Court Theatre. Not knowing anything about it, except my suspicion that more than just a few bloggers would be there, I was up for a night of mystery theatre and suggested to Gio that we should go. Even better was that it was short so we wouldn't have to suffer the inedible food at their bar / cafe and could go eat somewhere else. There is a trend in sophisticated theatres in London to serve pretentious overly fussy small servings of food made from ingredients that would be better off going into cans of dog food. The Royal Court is leading this trend... But anyway, we arrived to see that there were two facing tiers of seating... No stage. Opting for the one facing where we walked in, we sat down and waited for something to happen. Sure enough, the actors were already in the theatre. They were sitting among us. Actor number one, Adrian Howells starts speaking to people and saying how gorgeous we al
Read more...

How do penguins approve?

Do they make noises? Do they flap their wings? Do they issue special stamps? The latest water on offer in various theatres carries this penguiny message... Pity that given the amount of energy theatres use, this would hardly offset their carbon footrint... Posted via email from paulinlondon's posterous
Read more...

It has been awhile since updates on the blog, but there was a recent trip to Rome, general business, and a lack in interest in seeing anything cultural in London that partly explains that. Well anyway the cultural endeavours returned big time this week with a trip to the Barbican on Wednesday night to see the documentary Suddenly Last Winter , which traces the ill-fated journey of legislation to give equal rights to same-sex partnerships in Italy. I never went to any gay bars while in Rome, and arriving at the Barbican full of gay Italian men I wondered if they were like this... Albeit with more flattering lighting and better coffee. Actually it was probably better not to visit them given they seem to attract firecrack ers and molotov cocktails at the moment... Anyway the documentary was a personal account of a gay couple who traced the journey through the Italian Parliament of legislation that could have given Italy civil partnerships. Watching the documentary with a London audie
Read more...
More posts