Nowadays no self-respecting gay play can be staged without full frontal nudity of some kind. It feels like the default response for the modern gay play now that gay rights are no longer an issue.
Afterglow, currently playing at Southwark Playhouse, serves it up in spades. From the beginning, three men are in a bed, naked. There’s what appears to be a very brief exhalation of ecstasy, before the obligatory rush to the shower. But the gratuitous nudity and excellent performances can’t conceal this is a pretty conventional and predictable story about a fantasy couple.

The three men in the simultaneous orgasm at the start of the piece are Josh, Alex and Darius. Josh and Alex seem to live in a New York world where they can afford a rooftop apartment in Manhattan while holding jobs as a theatre director and a grad student in chemistry. As writer S. Asher Gelman based it on his own experiences, perhaps gay plays with full frontal nudity are the way to achieve financial security and great real estate. 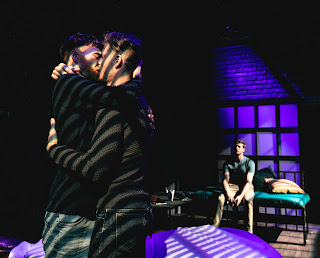 Anyway, they’re busy with their smug and fabulous New York lives, having random threesomes and incubating a baby from some unknown surrogate. As there are no women in the play, I was half hoping that this was going to be some sort of gay Handmaid’s Tale. But alas instead Josh and Darius develop a bond which leads them to declare their love for each other. It’s an odd night out at the theatre when a love story has you gasping.

But that’s part of the charm of this piece. No matter how bonkers or predictable Afterglow becomes, you’re still drawn into it. The performances by Sean Hart, Jesse Fox and Danny Mahoney help. They sound like New Yorkers and give the piece its focus.

And even if the scene changes take forever (who knew to move a bed and mopping up from an onstage shower would get so complicated), the production looks great too.

What it all means is anyone’s guess. A cautionary tale about threesomes in rooftop New York apartments? A Mrs Meer’s-like reminder about how it’s so sad to be alone in the world? Or an opportunity to see three actors naked and an onstage shower? It’s funny at times, but sometimes it seemed unintended.

Directed by Tom O’Brien, Afterglow is at the Southwark Playhouse until 20 July. 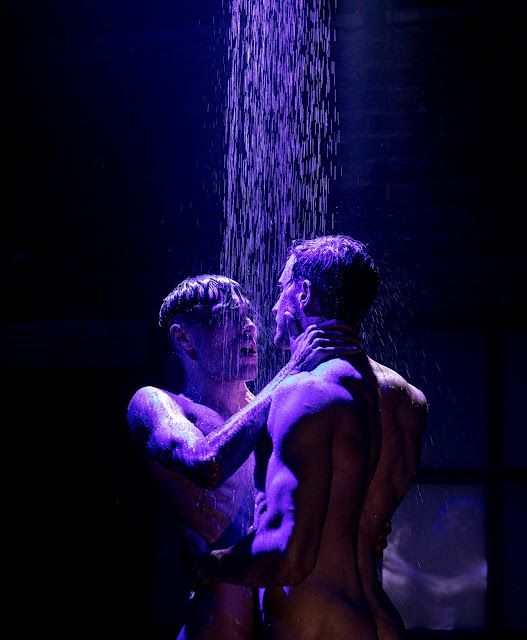