Showing posts from February, 2009
Show All

Overheard in SW9 on the weekend... 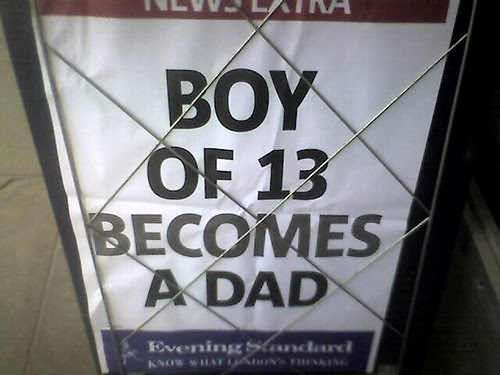 Boy Of 13 Becomes a Dad , originally uploaded by LinkMachineGo . East Sussex is pretty grim , But it may not be so grim after all... The boy may not be the father as the girl may have been the town bike ...
Read more...

Theatre: On The Waterfront

If there was too much sex on stage at the opera on Tuesday, there didn't seem enough of it on Wednesday in this engaging stage adaptation of On The Waterfront at the Theatre Royal Haymarket. There is a lot of excitement and dramatic tension in this tight production directed by Steven Berkoff ... Assuming you overlook some unintentionally hilarious moments such as when the actors play pigeons (the effect is funnier than the scenes of singing birds in The Producers ). But with all that tension and bitterness, I thought perhaps a bit of roughing up of the actors could have helped. Well at least in the climatic fight scene, it would have been nice to see Simon Merells (who plays the Brando character), have some of his clothes ripped off... Alas it wasn't meant to be. Still there is enough violence implied in this shadowy story of corruption and mob violence on the New Jersey docks in the 1950s. Berkhoff sees the story as relevant for any age. Whatever the case is, it is a g
Read more...

February 12, 2009
Tuesday night I found myself watching full frontal nudity and simulated sex at the Royal Opera House during the opening few minutes of Rigoletto . Now normally I would not have such a problem with seeing this, but I found myself preoccupied trying to work out if the actress having sex with a reasonably endowed actor had a Brazilian or a French. After much checking... It was definitely French. By the time the first act closed, I was distracted so much that I had to read the synopsis to work out what happened. It is a pity that this production (which has only been around since 2001) seems now to be full of distractions, but the performances made up for it. The last few operas I had caught had singers that were at times a bit suspect - both vocally and in the acting department - but this was not the case on Tuesday night. The audience reserved its most cheers for Leo Nucci in the title role. Rigoletto is a great story as well so there is so much going for this production... Even if on
Read more...

scenes from around haymarket Wednesday evening

...or maybe not... Posted via email from paulinlondon's posterous
Read more...

scenes from a rehearsal

Picture 211 , originally uploaded by Paul-in-London . Pubs did a brisk trade today, but for those who took to the parks, the thing to do was to make snow balls. Big, dirty, muddy snow balls...
Read more...

And more to come... Posted via email from paulinlondon's posterous
Read more...

img_0705 , originally uploaded by Paul-in-London . Heavy snow has been falling all evening and is expected to get worse overnight and in time for rush hour... Looking forward to the mass hysteria that will then ensue...
Read more...
More posts