Showing posts from May, 2010
Show All

It isn't quite a trip out of town, however on Sunday a trip to zone six to see friends in Ruislip felt almost like one... Still it was a chance to see suburban London, its wide open spaces, and the many tube stations it takes to get there...
Read more...

May 31, 2010
Vox Pops Dr 3 F9 480p (16x9) from David Newell on Vimeo . Eurydice takes greek mythology and gives it a twist focusing on the loss, memory and redemption in this production at the Young Vic . Maybe all this death and loos has been putting people off from seeing it as Saturday night's audience could have been larger. The play itself is not bad at all and full of mildly surreal scenarios with water that can leave a lot to your imagination. The play opens with Eurydice and Orpheus about to go for a swim and then off to get married. Meanwhile her father is writing letters of advice to her for her wedding to her but she is not getting them. On her wedding night she leaves the party lured away by a man who says he has one of his letters... Soon she is in the underworld and Orpheus is trying to get in touch with her... One of the problems with this play is that there is no sense about how much Eurydice and Orpheus like each other... Sure they are practically naked with swimming gogg
Read more...

The production of La Fille Du Regiment at the Royal Opera is in its first revival, and Thursday night's performance included Colin Lee in the role of Tonio, which earlier in the run was filled by Juan Diego Flórez. Having seen Juan in a passable but hardly thrilling recital at the Barbican earlier in the month, I was happy to miss him in the opera. The audience were thrilled after his performance of "Ah mes amis" with its nine successive high Cs and Lee himself looked awfully pleased as the audience cheered and applauded... The same applied after singing the tender declaration of love in his Act 2 aria, ‘Pour me rapprocher de Marie’. It was all great stuff... Laurent Pelly’s production, first staged in 2007 is a lot of fun and the performance by Natalie Dessay as the tomboy daughter of the regiment, who falls in love with Tonio gives the show its heart. The rest of the cast round out this great opéra comique (a slightly silly one)... There are two more performance
Read more...

May 26, 2010
The  Fantasticks  (which I mis-pronounced Fanta sticks thinking it was some sort of ice lolly) is now playing in the West End. It's a fifty-year old musical with whimsical songs and and tells an allegorical story that forces actors to run about and inflict injury on themselves for laughs. It played for forty years in New York and again has been revived again there recently, so there has to be something going for it. None of our party that included Johnnyfox and the West End Whingers had seen it before and the so it was as good an excuse as any for catching the second preview of this London revival... It is great they are offering stage seats for the show. Not only are they cheaper tickets, it is more fun watching it sitting on stage, assuming you can stay awake for the full two hours (not everyone in our party could do this)...  Plus you get a special little tour backstage to get to your seats (well not so much a tour but just a walk down some narrow stairs and past the props
Read more...

Theatre: Paradise Found (or at least something to pass the time on a warm night)

On Friday evening when it was warm and too nice to be indoors, Gio and I were indoors taking in a very early preview of the new show Paradise Found at the Menier Chocolate Factory . The audience consisted of Americans, the elderly, homosexuals or a combination of these. Given that it was a full house and the chocolate factory has only bench seating, you had no choice but get very acquainted and slightly sweaty with your neighbours. We knew nothing about the show and only the poster and programme art suggested it was going to be some warm loving sex show... Possibly set to music. What I did know was that it had a great cast of talented people in it... A cast that includes Mandy Patinkin , Nancy Opel , Judy Kaye, Shuler Hensley and John McMartin. It is directed by Hal Prince and Susan Stroman, and has music arrangements by Jonathan Tunick. You would think it is surely is worth a shot. As the show got underway, the story is about the Shah (John McMartin) and his trip to Vienna to fin
Read more... 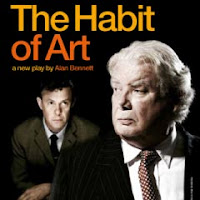 Note: this post was updated in December 2022 in an attempt to comply with Google content guidelines - however if a phrase used in the play about cocksucking violates these guidelines it still may have a content advisory… 🤷‍♂️ I caught the penultimate performance with the original cast of The Habit of Art on Tuesday, Alan Bennett's latest play which has been running since late last year at the National Theatre (and been broadcast in cinemas around the world recently). It's had great reviews and been hard to get a ticket... Afterall, it is an Alan Bennett play so you know it is going to have some great dialogue and something about 🐓sucking in it. There will be a new cast returning in July and a tour, but this cast had a bit more star power with Richard Griffiths and Frances De La Tour... Since the play does talk about devices, there is only one thing worse than plays within plays, which often seem to be a device to make a show that doesn't work slightly more palatable (
Read more...

Last weekend I ventured out of London to the Cotswolds  for the first time. The Cotswolds seems to consist of many cute little towns that all look the same and that offer an array of antiques, clothing for  the elderly and places to eat lunch. It is all rather civilised. Lunch in the Cotswolds turned out to be a very cruel sport. Establishments were either offering a one hour wait, or menu boards outside saying they were full and didn't want you approaching them. Once inside one of these sought after establishments, no menu could be considered complete without deep fried brie and some form of lasagne. With menus like that on offer it was no surprise everywhere we turned we saw fat people, such as Gloucester at sunset... Incidentally, the trip to Gloucester was accidental after being frightened out of Cheltenham by chain restaurants and loose women amongst the regency terraces. It was a chance to take in the cathedral, the various shopping arcades built circa 1970/1980, and a ra
Read more...

May 07, 2010
The Royal Opera continues in its current trend to show flesh with its slightly naughty version of Aida . I caught up with it on opening night last week, and this new production looks great. And with plenty of partial nudity, it can be a little distracting. While it has been a controversial choice in staging, I thought it helped since I really don't care for Aida as an opera - a small story blown out into epic proportions that goes on forever. Still, conductor Nicola Luisotti also gets a great sound out of his orchestra and chorus (if perhaps not his soloists). His thoughts on the opera are captured in the latest podcast from the Royal Opera as well. Opening night was also a charity fundraiser with HRH in attendance ( wheeling in his wife ), so the standard of dress was a little bit better than usual at Covent Garden as well... It runs until 16 May and worth catching.
Read more...

The other Westminster question on election night...

May 06, 2010
On election night, I was in Whitehall at the Trafalgar Studios watching the Australian (gay) play Holding the Man . The play is about two boys and their fifteen year relationship from meeting at a good Catholic school in Melbourne in the late seventies through to the early nineties.  It is based on the book of the same name . The story is part coming of age, part coming out, part gay life in oz in the eighties, and part dealing with HIV and AIDs. Two out of the four parts are quite depressing, but at least the coming out and coming of age parts are charming. Surprisingly for a play that has won a lot of awards (in Australia), I found it to be like a cliff notes version of the book. While I have not read the book, after seeing the play I feel I have a sense of its geography, but not its sentiment. The direction and staging don't help much either, which is fairly uninspired with too many "comic" diversions and a set that looks like a tip. This is a shame as the cast
Read more...

Scenes from tough times in a phone booth in London