Showing posts from November, 2010
Show All

Plugs: Make Your Own Kind of Christmas

November 20, 2010
In the lead up to the London Gay Men's Chorus Christmas Concert , the men have put together a series of clips to highlight the preparations... I think I can be spotted at the back row... I recognise that sweater from anywhere... The concert is on 10 and 11 December at Cadogan Hall and can be booked via the website. Discounts available through Whatsonstage and Gaydar as well...
Read more...

November 14, 2010
Arriving early at the National Theatre to catch a preview of FELA! on Wednesday evening was a good idea. The band was already playing and they sounded so cool. It was such a contrast to the hillbilly rock-a-billy music playing in the theatre foyer, which was being enjoyed by a group of pensioners and a smattering of eccentric dancers who looked as if they were on day release. Who knew that one building could cater to so many tastes? The Olivier Theatre just felt like the place to be. That is no mean feat given the size of the place. Art, graffiti, lights are everywhere and there was the band with its cool beats and sounds... When FELA! finally gets started, it tells the story of Nigerian musician and political activist Fela Kuti's last night at his Shrine club in the late seventies. Part concert, part dance, part rambling dialogue, and part musical, what is brilliant about this show is its ability to give context to the man and his music. The show weaves in the events that
Read more...

Life in London: One New Change

See and download the full gallery on posterous Meat and shops Posted via email from paulinlondon's posterous
Read more... 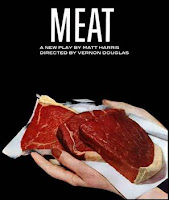 The shows in London are always full of awfully talented people. Here is one in which I haven't seen but just love the poster. I suddenly have this urge for rib eye (or it could be really thick rump I suppose), even if I'm not so sure about the hand model... The play is apparently based on a Tennessee Williams short story and it is dark obsessive tale set in an abattoir  office. It's at The Albany  in Deptford next week and the Giant Olive Theatre at the Lion and the Unicorn in Kentish Town the week after. Vegetarians may wish to steer clear...
Read more...

Sunday afternoon was a chance to venture to Hoxton Hall to see the musical Bright Lights, Big City . For the second day running, this was another great cast in a a great production. The music (which I had not previously heard) wasn't that bad either. Musicals usually have a set format but this is not your traditional quirky heterosexual musical, but a hard core, full-on journey through one man's drug-fuelled sordid week in the eighties. Naturally big hair and big glasses abound, but with the everything eighties seemingly fashionable again it all seemed a natural fit in the surrounds of Hoxton and the East End. It was like spending a cool afternoon in your living room with a concept album that came to life. The cast were all great, particularly Paul Ayres as the lead, Jamie, and Jodie Jacobs as Vicky. Watching it with Johnnyfox , he was less sure about to make of it. He was off that night to see the concert version of Company so I thought it might be helpful to make a compa
Read more...

Tomorrow Morning has been playing at the Landor Theatre in Clapham North for the past month and is a great little show. It is a four-hander musical about a young couple (well sort of young since  Jon Lee is one half of it) getting married, and an older couple getting divorced. I don't want to say the second couple is old as it appears the couple getting divorced are no older than me and have fabulous jobs and tight fitting suits. Despite the divorce and the child custody issues you still get a sense they are living the dream though slim cut tailoring... The show was first presented a few years ago and has gone through some revisions since then. Here it is presented as a very slick engaging production with an incredible cast. Heading it up with Jon Lee is the lovely  Julie Atherton along with Grant Neal and Yvette Robinson . The performances make this show very memorable and the production is one of the best looking I have seen at the Landor. The set comprises of a series of s
Read more...

November 09, 2010
The BBC has caught on to the trend of Speed flat-dating  (or speed flat-mating... Actually either sound a bit suspecting). Here's hoping that stories like this will reduce the need to explain to partners you don't live with what you're getting up to... Trying it over the summer when looking for a place I found it was great. It's less pressure than a real date as everyone has name tags which indicate what area they are looking for and what they are offering / prepared to pay so everyone knows where people stand and you don't have to trundle down confusing streets at night to meet new prospective flat mates. Of course you still might need to do that, but there is something reassuring about a familiar face at the end of dark road. All that is left is to your partner for instance that you are going out for a speed-dating-like experience to find a flat share... It's not a good idea to say your going out drinking if you don't usually do that. But I met a rea
Read more...
More posts