Showing posts from July, 2022
Show All

A musical about yeast conjures up all sorts of things about what it could be. Is it about a nation's obsession with home baking during a lockdown? Or is it the latest infection outbreak? No, it's neither of these. Instead, it is a rock musical about the unicellular organisms living in the primordial soup. Purporting to be the oldest story of all time (as it’s probably hard to go back further than single-cell organisms), It's part rock musical, part history lesson, part Greek chorus and part bonkers. And it's currently playing at the Southwark Playhouse . Narrated by Jan, the unnamed, it tells the tale of a series of salt-eating yeasts (all called Jan) at the bottom of the primordial soup/sea. They are in stasis, following careful strictures, so they don't reproduce or change. They sing a catchy tune called stasis is the membrane and live a balanced life with the soup around them.  But not all yeasts are satisfied with stasis. And when some yeasts rise to the top to
Read more... 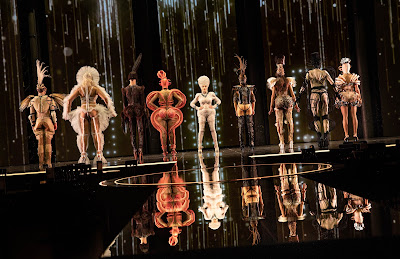 Is it a fashion show? Is it a cabaret? Is it a celebration of Jean Paul Gaultier’s work? Does it matter? Well, it’s a little bit of all of the above. Music, fashion, video projections, and dance collide in this slick and sexy profile of the world of Jean Paul Gaultier over the past five decades. With over 400 costumes, acrobats, singers, dancers, projections and a throbbing soundtrack, it’s a world where beauty is everywhere. And excess, raunchiness and a little bit of breast and buttock are de rigueur.  It even smelled like him. His fragrances wafted throughout the Roundhouse on the gala press night earlier this week, with the various reviewers, influencers and fashionistas grabbing the free samples in the toilets and spritzing them about so that you were living and breathing Jean Paul Gaultier.  First presented at the Folies Bergère in Paris in 2019, it has made it to London with a few updates, such as a catwalk. Lights, music and digital projections overwhelm the senses that sometim
Read more...

July 10, 2022
There's a moment in the Lesson when the Professor is giving his eager pupil tutoring in mathematics. She has excelled with additions to this point and can multiply infinitely. But the whole concept of subtraction baffles her. The Professor's disappointment is palpable, and his anger grows every time she says seven when trying to subtract three from four. Thus begins a descent into absurdity and madness in this briskly paced piece that appears to be about nothing and everything. It’s currently playing at the Southwark Playhouse . The Lesson is an early play by playwright Eugene Ionesco and is an excellent introduction to the theatre of the absurd. The premise is that a relatively mild-mannered professor provides an enthusiastic young lady tutoring so she can get her doctorates in everything. Well, if knowledge is power, why not learn everything? It made perfect sense to me. She is bursting with excitement to learn at first. But each time she struggles to comprehend and get it ri
Read more... 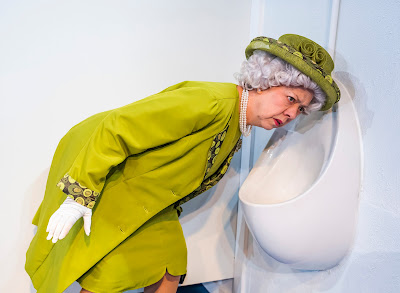 There appears to be a fascination with the bathroom habits of the Royal Family. In Melbourne, Australia, you can visit the royal bathroom at the Arts Centre in Victoria that the Princess of Wales refused to use . Or there is the toilet at the V&A in South Kensington built for Queen Victoria. Perhaps it is the great leveller. After all, everyone has to do it… And with that in mind, we are presented with The Throne by John Goldsmith, currently playing at Charing Cross Theatre .  The premise is that the Queen is locked in a bathroom with a republican. Two hours watching the Queen in a lavatory might not be everyone’s idea of a night out at the theatre. But it sounds like it could be funny. But this is a gentle comedy that has the purpose to put a republican and the monarch on a debate over British history.  The prominence of the bathroom is slightly jarring when you enter the Charing Cross Theatre, and audiences should be prepared to be looking at a urinal for the whole evening. Fort
Read more...
More posts