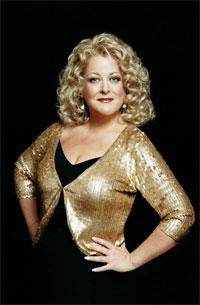 Messing about on the river aside, Saturday night provided the opportunity to see Deborah Voigt in recital at the Barbican. It was the first time she had performed in London since being dumped from a Royal Opera production for being too fat to fit into the costumes. She acknowledged during an encore that she was a little bit nervous about coming back. The audience broke into applause at this point. All seemed forgiven on both sides.

Well perhaps London hasn't forgiven her entirely since the Barbican Hall wasn't exactly full. But her absence and the lack of a full house is London's loss. Now a few years later she has slimmed down (thanks to much publicised surgery) and sounding great. Tonight's concert was a marvelous programme with songs by Mozart, Verdi and Strauss in the first half and then American composers Beach and Bernstein in the second. This gave her the opportunity to cut loose a bit. For an encore she even tackled Berlin's "I Love a Piano" before sitting down with her accompanist Brian Zeger to help belt out the melody. It bought the house down.

It's great to see one of the leading dramatic sopranos show a bit of their own personality in recitals... She will be appearing at the Royal Opera House next season. Here's hoping we can see her in concert again soon too... The concert was something everyone in the hall wanted to hear again...