About twenty minutes into the movie Savage Grace - which I saw last night with Grant at the Curzon Soho - a couple in the row we were sitting decided to get up and leave. The seats aren't wide enough to let somebody pass easily so it was a bit of a drama to let them by. We both mumbled something along the lines of "furfukssake". I wasn't sure whether they had had enough of the unsettling content, or they were just in the wrong cinema. I settled on it being the latter as everytime I go to this cinema I find myself surrounded by freaks. But there was also something unsettling but still rather smashing about this film. 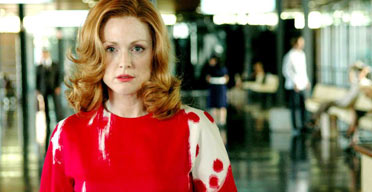 The movie is based on the book of the same name, which is an interpretation of the true dysfunctional and incestuous relationship of rich (but slightly disturbed) heiress Barbara Daly Baekeland and her even more disturbed son Antony. Julianne Moore plays Barbara and gives her a sympathetic bent. She also looks great too. Maybe the real Barbara Daly wasn't anything like this, but it was a relief she was in the film. I suspect the film could have been a lot more disturbing, but thankfully the movie only focusses on a few key scenes and a whole lot of gorgeousness...

The film is a tragedy, although my mind did wonder to American Pie during the final seduction scene. This incest may or may not have been Barbara's attempt to prove to her son that he wasn't gay (although for the first 80 minutes he had done a good job at proving that he was)... Certainly a unique film... And one that I found difficult afterwards explaining to mates in the pub over a few beers without them being very disturbed: "She notices her sons new suit and starts rubbing it going, 'I love this fabric' and then she moves her hand into his crotch and goes, 'And I love this too...'" Maybe it was the timing of the delivery... Either that or they have mother issues just like Anthony...