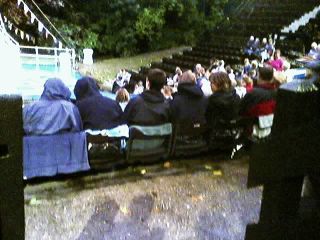 Scenes from Regent's Park Open Air Theatre Wednesday 20:08 - A delay starting due to wet weather... Those in the know brought garbage bags and towels. Live and learn.

As for the show, well HMS Pinafore in the damp cold night air wasn't the most pleasant of experiences - it seemed less of a production and more of an embalming of G&S.

The last time I saw this show I recalled:
Also of note:
Oh well... You win some and you lose some. At least the mulled wine at interval warmed things up a little.. If you ask me...