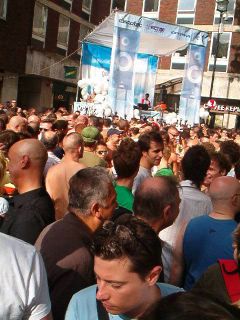 Scenes from Soho Pride Sunday 16:50 at Soho Square. Today the punters came to Soho for a big gay street party. The weather even warmed up enough to make wearing a shirt unfortunately optional for many... Still there were some nice fit people out and about.

Walking home from the theatre on Saturday evening at this same location I saw some gentlemen who had featured in some straight-to-video films that are popular amongst the gay community. They were wearing t-shirts that proclaimed what Eastern European production company they belonged to. A was not familiar with Bel Ami so I had to explain their cultural significance...