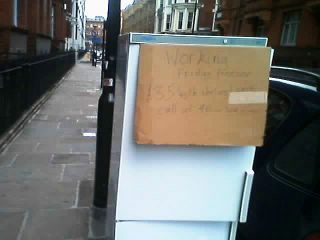 Scenes from Bloomsbury Sunday 14:11 - It isn't everyday when you find a working fridge freezer for £35 outside your front door... Not surprinsingly (as Londoners love a bargain), within an hour it was sold... Just in time to beat the heavy afternoon rains that would have probably rendered it less useful...

In another curiousity the central heating came on this week in the building... Apparently winter is here even if it isn't... It made me wonder whether:
In another property matter my flatmate R went to the East End on the weekend - Hoxton to be precise - to look at a penthouse apartment at the top of charming 1960s council building. He took a friend who commented that while the area is ripe for regeneration (afterall the East London line is going there and it will be closer to the Olympics site), it isn't there yet. And you still have to share the excrement-smeared lifts with the other distinguished residents on your way to the top. To top it off the owner of the penthouse managed to give the place a hideous makeover with bathroom tiles in the living room and a curious display of the man appearing in photographs with African men sporting AK-47s. R decided against making an offer on the place. It just wasn't him...