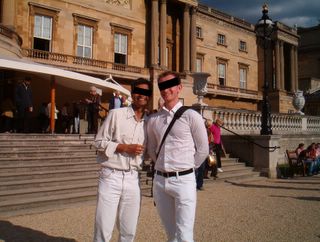 Scenes from Buckingham Palace Saturday 16:03. Just who are these two gentlemen in white? Rumour has it that they went to Buckingham Palace in their white wardrobe to see the special exhibition of Queen Elizabeth's (later the Queen Mother's) White Wardrobe. While their clothing isn't exactly Norman Hartnell it is amazing how the one of the right is wearing a black sash just like the Queen did on her tour to France in 1938 (although the fact that it is a black Kipling bag is beside the point)...

The summer opening of Buckingham Palace (which runs through to 27 September) was a chance to see the State Rooms of the palace as well. There is a sense of the dramatic in the design of some of these rooms along with a great sense of history. The state rooms are a mixed bag of grand stately design and over the top dramatics but it all seems to work rather well. Besides it is a fabulous location with a rather grand backyard (where the above photograph was taken). One also got to see some of the secret passageways that connect the state rooms to the private residences.

The actual White Wardrobe exhibit was a bit of a disappointment with only a handful of dresses on display and a few of the gifts. It would have been much more interesting to have a more substantial collection of the dresses to reflect the style of what she wore, and how this became her signature look etc etc but it wasn't to be. Instead it was just a few moth-eaten silks and sequins from the 1938 visit. Oh well, museum curators the organisers are not... The rest of the tour was interesting enough anyway.

As one leaves the section of the grounds you are permitted to walk in you have the chance to purchase royal ice creams and buy trinkets in the royal shop (a copy of a copy of a copy of royal plate anyone?). Along the walk A kept pointing out to anybody who looked in our general direction we were wearing our white wardrobe... So much for the subtle joke.

Oh and one was not the illegal immigrant arrested on the grounds on Saturday either. We paid to get in...