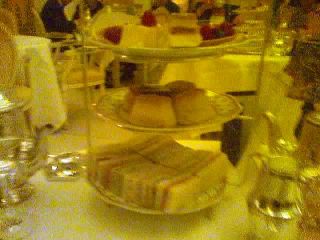 Scenes from the Ritz Tuesday 20:00 - Champagne Afternoon Tea with an assortment of sandwiches, scones and pastries. A declared that it was definitely something sensible to do before one turns thirty amongst the palms and golden light and silver service... And it was ever so sensible.

The late sitting wasn't as heaving as other sittings can be throughout the day. There were an elderly couple a little way over who A suggested could be us one day. He particularly remarked that the old lady could be me in the future as he could always picture me wearing a pearl necklace.

There was an element of surprise to the goings on as I was told to meet him outside Fortnum and Mason at 7pm wearing a jacket and tie. Since being on vacation for the past few weeks this was a change from what I had become accustomed to wearing but jeans and A&F polos can't do for every occasion...

So I scrubbed up fairly well and we walked down Piccadilly to the hotel. It was such a warm night however that being served initially with Champagne and then washing it down with copious amounts of Orange Pekoe did have an unusual effect on one's constitution. I vehemently denied A's accusations that I had become drunk on one glass of champagne!

But still amongst all the glamour and glitz, it is very easy as one sips Orange Pekoe to see what others in-the-know know, about life's cares passing away when having tea at the Ritz.