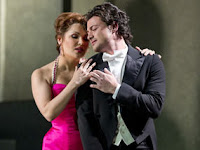 Last Tuesday night's opening night of Manon at the Royal Opera was a surprise. A four hour opera comique that was so engaging and so thrilling that you didn't care you had been there all evening watching the melodrama unfold, and you would not have minded staying longer... There is something very engaging about watching how somebody's choices in life lead to their own downfall... And of course there is great music, beautiful costumes and interesting sets... Some wonderful photos from the evening are on Intermezzo's blog.

This is a new production of Jules Massenet's opera and while the story has been updated and made sexier by Laurent Pelly, the stars of the show were Anna Netrebko and Vittorio Grigolo in the lead roles (featured above). Despite a high profile in both USA and Australia (something to do with a best selling crossover album and a stint on Dancing with the Stars), Grigolo was making his Royal Opera debut and from his arrival on stage you could feel the audience sit up and take notice... We were watching something potentially special here. While his singing style may not be to all tastes, there was so much passion and fire between the two, and the production felt so intimate that you could have been forgiven for feeling a tad voyeuristic.

Watching Netrebko in this piece was watching a marathon runner at peak form as her character moves from innocent to schemer, to fallen woman. It was one of those nights at the opera where the casting, production and music all fall into place... It runs until 10 July and it would be a shame to miss it... Grigolo will also be releasing an album entitled "The Italian Tenor" which will be out later this year and I suspect we will be hearing a lot more from him...