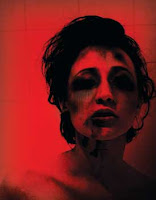 I was really in the mood for watching Theatre of Horror at the Southwark Playhouse Thursday evening. Maybe it was the skin biopsy I had a lunchtime that put me in the mood. There I was, watching chunks of flesh being taken out of me and put into little jars, blood dripping down my leg and feeling the stitches forcing it all back together. At one point the doctor said, "Oh you turned your head at just the right time," as I watched a little slice of me going in a jar. The shows were tame compared to all that, but still in the same vein.

The first piece, "The Exclusion Zone" started off incredibly disturbing about a young couple wanting to have some fun in the woods. It was a nice ride until the end song, which was inaudible and hard to understand the connection to the previous twenty minutes.

The second piece "The Unimaginable" was a slightly creepy monologue about people who swipe your children. After mentioning parents who go out to the theatre and leave there children at home, I was half expecting a reference to the Tapas Nine. Alas it was not so topical. After intermission was my favourite piece, "Country". This centred around a woman coming to terms with her dead husband who had just written the latest NHS White Paper. It turns out she was possessed by him and seeking revenge against her left-wing friends. Finally there was "Reanimator" which was a long piece adapted from short stories by HP Lovecraft, but had some fascinating scenes with a dead rabbit and zombie-like resurrections.

Holding the show together were Sarah-Louise Young and various others with songs and belly dancing. While the pieces were a mixed bag and scene chewing abounded, there were a few thrills across the piece and some inventive uses of the space. The Southwark Playhouse also has a great bar and you can take your drinks into the theatre. Grab a drink and go for a slightly disturbing evening. The horror runs through the end of the month.