If the eighties were the decade of big hair, big angst and big dramas, then Neil Simon's comedy-farce Rumours probably fits in rather nicely. It is a sex scandal, political intrigue, power dressing fetish extravaganza rolled into one. Farce isn't every one's cup of tea but I was in the mood for cheap laughs on Thursday evening and it did not disappoint.

This production transfers the setting from its original New York to Oxford, which makes the cultural references more relevant. The premise is that as guests arrive at the home of the finance minister and his wife for a tenth anniversary celebratory dinner, there is an attempted suicide and the hosts are nowhere to be seen. Given the status of the hosts and the guests, everyone decides it is in their interests to conceal the truth rather than risk a political scandal. Cue pandemonium. 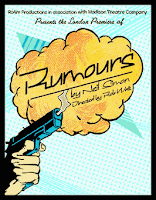 While I wasn't sure if anyone in the cast was born in the eighties let alone lived through it, there are some nice touches in this play. While there was no door to swing open and shut, the budget in this production did extend to some fabulous 80s style hair. The hair is introduced as a series of over-the-top creations, getting more absurd as each character is introduced. By the time Claire Lyons storms in as the celebrity chef Cookie, her big flowing ginger locks make her look as if she is channelling Rula Lenska (or Rupert Everett in St Trinians).

The cast are impressive in their hard work at keeping things afloat. While shouting does not necessarily give the play the pacing it requires, and the young actors didn't quite have the years behind them to be as faded and jaded as the people they portrayed, the characterisations constantly offer up nuggets of unexpected laughs (which most of the time don't pull focus) and keep things interesting and varied for the show's ninety minutes.

The play is a co-production of Roam Productions and the Madison Theatre Company and feature the awfully talented actors from both. It is directed by Rob Watt and runs through to 18 June at The Hen and Chickens Theatre in Islington. It is my first visit to this great little theatre pub in Islington, which also features comedy on its evening line-ups. Although get a cold beer before going in if it is a warm night. There was no air-conditioning and it does get a little warm...