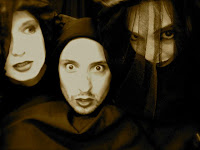 From one fringe festival to another, on Monday night I found myself with Johnnyfox at the Royal Vauxhall Tavern catching Grindhouse, an evening of experimental theatre from RE:artzzZ as part of the Hot August Fringe.

Vauxhall around the RVT is an odd place to spend a weeknight. The busy roadway, the sense the venue is boarded up and the empty side streets gives you a hostile vibe about the place. On the other hand, we had it on good authority they serve a good scampi and chips, and you can smell the vinegar from the food upon entering.

As the act prepares to begin, the audience is weirded out by some mortuary chic as the performers wearing various shades of black and grey, walk around the venue staring at the patrons. It is slightly unnerving particularly when you are sharing a plate of scampi, but effective nonetheless. The attention to detail in the costumes were particularly impressive.

Grindhouse consists of two parts. The first part, Dial M, performed by Greg Tate is an engaging one man performance that is unbearably intense at times. It is a story of love, terror and obsession. A lot of obsession. There was a quip about cutting off a clitoris and putting it in a sandwich, and the simulation of a sexual act was hilarious. Whatever the intention of the work, it was clear this character had some unresolved issues with his mother...

There is barely time to go to the bathroom before the second part, Asta Nielsen Is Dead commences.  Asta Nielsen was a star from the silent movies era. This moody multimedia piece is performed by Regina Fichtner as Lady Pumpernickel and Patrizia Carlota as Miss Carrota and uses projections, text and movement to create a silent story on stage. Unfortunately the technology let us down on Monday evening and it was not possible to finish the piece which meant the funniest parts were not presented. So instead, I asked Regina and Patrizia what inspired them...


Regina: I saw Asta Nielsen’s silent film ‘Hamlet’ from 1921 and was very impressed by her unique acting style. In there, Asta Nielsen plays a female Hamlet. Her ‘silent moves’, the way she plays the cross gender character in this early film, are very different from other actors of early cinema like Charlie Chaplin or Buster Keaton. It is more serious rather that funny and clownish.


Patrizia: When we watched it together, it reminded us a lot of Expressionist dance. The way she uses her facial expressions in relation to her body movements and her environment is very special and has much potential for inspiring choreographies. Her “Hamlet” has formed the starting point of our movement research.
Regina: We both came to the conclusion that being a film star and being mummified on celluloid is a completely different  thing to performing live on stage. As emergent artists we have a totally different status to a film star in the early cinema. The audience has to love us – otherwise we "die" on stage… The bizarre concept of death in ‘ASTA NIELSEN IS DEAD’ was born:  we have to entertain the audience or we die and nobody will take notice of our art.
Patrizia: But for us it means much more: Playing a suicide on stage and trying to entertain at the same time is not just a bizarre style of performing. We hope the audience is able to read between the lines, images and movements on stage. It's a question of what artists need nowadays to be loved by their audience and also by their fundraisers… In order to survive!
Ain't that the truth...