Backbeat is based upon the film of the same name which is a snapshot of the period when The Beatles were on the edge of stardom. It is also about creativity, artists, relationships and some excellent classic rock and roll music. It is thoughtful and fun, with a talented and good looking cast that can act, sing and play musical instruments and the bar has now been set very high for the jukebox musical.


Set during the period when the Beatles were in Hamburg, the focus of the play is really the triangular relationship between Stuart Sutcliffe, the band's original bass guitarist, German photographer Astrid Kirchherr whom he fell in love with, and his best friend John Lennon. It was through this relationship that the Beatles developed some of their signature looks and where some classic photos from their early days originated and the focus of the story is from Kircherr's point of view. 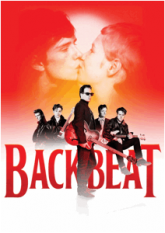 It follows the film closely but as a theatrical piece it feels much freer in being able to express the flavour and sentiments of the time. Through moving sets, projections and music, the story moves briskly and explores the process of creativity, art and the sacrifices individual makes for a group.

It isn't all contemplative, there are bare buttocks and blow jobs on stage as the boys find out all that Hamburg in the 1960s has to offer. And there also is the excellent rock and roll music that was the backbone of what the Beatles were all about at this point in their career.

While the entire cast are excellent, key to the show is Nick Blood's performance as Stuart Sutcliffe and Ruta Gedmintas as Kirchherr. They ooze cool and believability.

The full story of the Beatles is a tale still to be told, but in the meantime this is an excellent night out. You don't have to like the Beatles to appreciate it. And in case anyone was feeling a tad unsure about the message, there is dancing in the aisles at the end through a Mamma-Mia-like encore. You will be twisting and shouting all the way home, but unlike other shows you will remember the play for longer.

It is playing at the Duke of York's Theatre. Go see it...