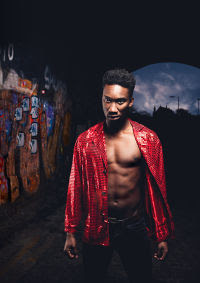 Wednesday night I was fortunate enough to see the first preview of The Pitchfork Disney at the Arcola Theatre in Dalston.

It is a mildly unnerving post-apocalyptic tale of dreams, nightmares, chocolate and things that bug you... Nothing is quite what it seems in this play. And through a series of monologues, there are laughs and shocks. It is hard to talk too much about the play without giving it away. But it is a showcase for some very talented actors.

Chris New - who was in the well-received movie Weekend - gives an intense performance as Presley. He is great to watch along with co-star Nathan Stewart-Jarrett (pictured) as Cosmo Disney. Both manage to make their crazy roles believable and interesting in as much as that is possible. Rounding out the cast is Mariah Gale and Steve Guadino...

Philip Ridley's play celebrates its 21st anniversary this year. While it may not be as shocking to audiences now as it was then. It does have a certain unnerving quality that remains, and this production does show the work at its best. The creepy theatre space of the Arcola - where there is a fine line between the ghosts of past industry that inhabited the building and organic beers - also adds to the tension.

It runs through to March. The musings of @johnnyfoxlondon and I follow (with apologies to Webcowgirl as she was stuck in the line for the ladies while we were boo-ing - or she was hiding somewhere after being disturbed by the show - I was not sure)...