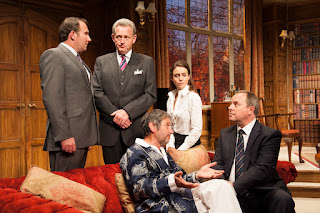 The original television series was a quintessential satire from the 1980s and ran from 1980 to 1984 as Yes, Minister, and then 1986 to 1988 as Yes, Prime Minister. It was purportedly one of Margaret Thatcher's favourite shows. So anyone keen to wonder what writers Antony Jay and Jonathan Lynn would make of the modern political environment of spin, coalitions, European rules and global recession the answer is here. Sir Humphrey Appleby and Jim Hacker now find themselves dealing with a loan scandal involving illegal workers and sexual favours against a backdrop of global warming and financial collapse.

It is a strong cast (pictured above) heading the show. Robert Daws of Outside Edge fame plays Prime Minister Jim Hacker. He alternates between looking Prime Ministerial and looking the fool. Alongside him is Michael Simkins. He seems to bear some resemblance to Cabinet Office Minister Francis Maude but as Cabinet Secretary Sir Humphrey Appleby the audience laughs more at what he doesn't say than what he does. There are some moments of great comic timing, although you also couldn't help but wonder if the actors switched roles would it work just as well. Clive Hayward as Bernard and Emily Bruni as Claire the special policy adviser fill out the main cast.

Of course in the years since these characters first appeared there has been numerous other satires such as Drop the Dead Donkey and The Thick of It. Each new show has been sharper and given more edge to political satire (although the unwatchable 10 O'Clock Live show on C4 is a case of possible devolution). Given this, it is disappointing that sometimes the punches are pulled in this show and tend to go for safe targets such as an undemocratic European Union. The best laughs come from some well-placed jokes about the BBC and its self-importance and the civil service padding their incomes and gold plating their pensions. Unfortunately there some less amusing moments involving some stale ethnic references and a "joke" about sex trafficking that could have been left out.

Unlike in the television series, the Prime Minister's wife does not appear which is a shame as it does not give the chance to make Hacker look a bit more human, or to calm things down. While perhaps the edge of the original series is not there, it still provides for an entertaining night out, but perhaps more smirk out loud than laugh out loud as you would expect. The usual discussion with @johnnyfoxlondon ensues on the Audioboo below... Tickets are available at the usual outlets and look out for discounts and offers.

Update: One offer currently running is tickets for £29.50 for Monday-Friday performances as well as Saturday matinee until 31st August. To redeem, customers can either call the box office and quote "Online £29.50" or use the promotion code YESPM when booking online...