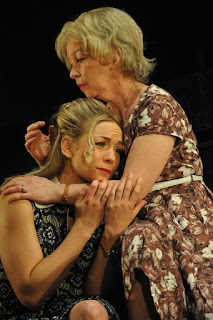 Dangerous Lady, Theatre Royal Stratford East's East's new stage adaption of Martina Cole's bestseller is a trashy, violent and funny production that will have you enjoying almost every minute of it.  There are wry observations about criminals, the police and class in this piece. Things are not black and white and what is right or wrong is not always easy to tell. It is a bloody tough life and it is the women who are the survivors and keep things together.

The play opens with an unexpectedly frank depiction of childbirth. Later in the first half there is an intense scene depicting an abortion that had members of the audience so engaged they were screaming out in horror as if they were watching the backyard procedure really take place. There is nothing gruesome on stage, but the production manages to suggest just enough to have most audience-members squirming... or about to pass out...

It is all part of the gritty depiction of the life and times of a London Irish gangland family. And at its heart is the story of Maura who joins the family business after a love affair goes wrong and helps her wild and gay brother carve up London.

Clare-Louise Cordwell plays Maura and manages to make transition the character from optimistic and innocent to a cool and calculating criminal believable and gives such an enjoyable performance as she moves from naive young girl into the mastermind behind a criminal empire. But she also keeps things real and has a tremendous likability about her so even when the story becomes a little far fetched, it is hard to mind too much. Veronica Quilligan (also pictured) as the mother also manages to create a truly memorable character that is not just a one dimensional evil woman. Although at times during this epic piece her wigs and makeup make her look more like the Home Secretary than an ageing matriarch.

Things move briskly in this piece and it is helped by some clever staging and a production that is one of the more slicker shows I have seen at Stratford East. The piece spans thirty years as the family move from small time gambling to big time property deals in the Docklands so things need to move, and a double revolve keeps characters spinning in and out of the story at a brisk pace. It is a slick production and hints of drama, great use of sound effects and lighting give it added panache.

Even if you have not read Martina Cole's book it is based upon, this play stands on its own as a great story, interesting production and strong cast. It runs until 17 November but with sex, violence, laughs, strong Irish women with filthy mouths, it should have a future beyond this short run... Don't miss it...