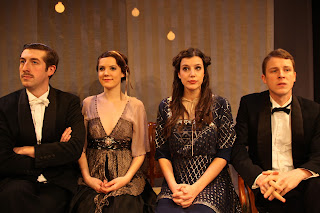 The Wilmington Theatre Company's debut production of three short comic plays by George Bernard Shaw makes for a frightfully witty and enjoyable evening at the Old Red Lion Theatre. The acting and production values are quite high as infidelity, polygamy and morality are all explored. Often with hilarious results.

In the first piece, How He Lied To Her Husband, a wife loses poems written for her by her young admirer. They fall into her husband's hands and his response is not quite what the wife or lover expect. It is a three hander that plays well in the confines of the theatre space and with a focussed cast everyone was hooked. Well almost everyone as there was a couple in one corner that may have got carried away with Shaw's attempts to hold a mirror up to nature and were passionately making out.

The second piece, Overruled, covers two adulterous couples who are caught in the act on vacation. The source of the comedy here is the honesty of each of the couple's explaining what they are doing and why. Shaw felt that this was a clinical examination of polygamy and an understanding of why couples do what nobody wants to admit in polite society. But the frankness and sharp dialogue is what gives the show much of its humour, and the actors deftly handle the banter.

The final piece, Village wooing, is a sweet comic tale of a shop assistant who wins holiday cruise and meets a travel writer. The writer however is so interested in his own writing that he doesn't see what is happening around him at the moment. Musing afterwards with @johnnyfoxlondon (below), Shaw's observations seem as relevant today as they were in 1933. People still travel and live life through a camera lens and social media updates rather than the real world. Lucy Hough as the shop assistant with a plan and Jim Creighton as the bad tempered travel writer create a believable world that creates class divisions and distinctions between metropolitan and village life as a means to distract themselves from more basic instincts.

Together the three pieces make for an enjoyable evening of what feels at times to be the forerunner for today's sketch comedies. Polina Kalinina's direction keeps things moving along quickly and Emma Bailey's design captures the Edwardian splendour quite nicely.It is an impressive debut for the Wilmington Theatre Company, which was set up last year by Lucy Hough and Leo Wyndham.

Overruled continues at the Old Red Lion Theatre until 19 January. Tickets available from their website and the running time is just over two hours including interval. The theatre gets quite warm so dress for that and get a large cold glass of something from the pub downstairs to stay cool. And try not not to let the immorality get to you... Any attempts to make out with your companion can be seen by the audience. But it might be a show to take your best friend's wife to anyway...

listen to George Boonard Shaw: Overruled at the Old Red Lion; on Audioboo