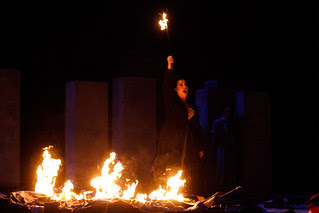 The Royal Opera's new production of Nabucco has received some mixed reviews - particularly with the sandpit staging - but catching the final night where Leo Nucci was playing the title role, it was clear that fine music making and some extraordinary singing will keep you on the edge of your seat.

The production has updated the period to the twentieth century but for the most part this does not get in the way of the story, or more importantly the singing.

My side view of the production (which restricted seeing the rear projections that "comment on the action") probably helped as it looked like it was pretty busy back there at times to the point of distraction. But it was hard to deny the beauty and power of some of the set pieces, including where Liudmyla Monastyrska as Abigaille sings lit only by flames (pictured above, photo credit Catherine Ashmore).


If you can't get tickets (particularly now since Plácido Domingo has taken over the title role the remaining dates seem to be sold out), it is going to be broadcast in cinemas on April 29 as part of the Royal Opera House Cinema series.