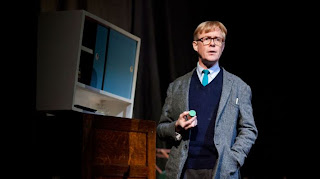 Alan Bennett's Untold Stories at the Duchess Theatre is an opportunity to sample two short stories from Bennett's life recounting his experiences with his parents. It is an enjoyable and contemplative evening at the theatre. It possibly is a little too quiet and contemplative as I could hear and see a few members of the audience nodding off to sleep in the first, shorter piece.

The play is two snippets from a larger volume of observations and stories of the same name. He wrote it while being treated for cancer and was expecting it to be his final work to be published after his death. As noted at the time of publication it had a valedictory quality to the piece (or a hint of death?). Thankfully the cancer went into remission and he was able to finish the stories, and write some smashing new plays - such as The History Boys. But death still lingers over the work here as it is about recalling times past now that his parents are gone. 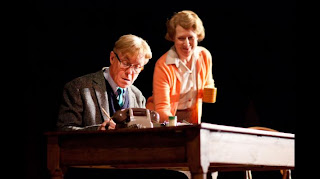 The first piece, Hymn, was responsible for sending a few members of the audience to sleep. Not because it is boring but it is so peaceful and relaxing listening to the string quartet that after a long day at work you might succumb to a little nodding off. It recounts Bennett's attempts to learn how to play the violin from his father. Essentially a sweet monologue set to music, it has the qualities of fine radio programme that possibly is a little too gentle and delicately handled.

Things get a lot more lively after a short interval with the more substantial piece "Cocktail Sticks". It recounts how he felt his parents were "too ordinary" for a writer who needs desperation and despair for creative inspiration. It is an often funny piece which is helped by the performances that feed off Bennett's observations (Jeff Rawle and Gabrielle Law play his two ordinary parents). As both of them succumb to the inevitable his reappraisal of their lives and observations about his mother's yearning for a different, more glamorous life also gives the story a more sombre tone.

Alex Jennings as Alan Bennett manages to channel both his looks and mannerisms that you could be forgiven for thinking that you were watching the real thing. It probably helps to be familiar with some of Bennett's work as the piece assumes that you know he is a national treasure... And have at least heard how he speaks (if you haven't there is always his Family Guy cameo).

There are some universal themes in both pieces about family, growing up, and particularly growing up as a gay man. But also what struck me was how many cultural references sailed over my head. Perhaps an introduction to life in Yorkshire might have been a welcome addition to the first shorter half of the evening for people unfamiliar with their strange and unusual ways to understand what all the fuss is about...