May 14, 2013
The latest from the Love Bites series, Apartment, which ended its brief run at the Etcetera Theatre in Camden last weekend was again an opportunity for some witty reflections on the theme of love, this time with the theme of apartments being the common thread between them. The Love Bites series showcases some excellent new writing and performances from emerging playwrights, actors, directors and illustrators. It was a short evening of four plays this time around and each were funny and insightful in their own way. It is a real treat to see such a high quality writing and performances in a fringe venue and it is well worth seeking out when they stage their next instalment. 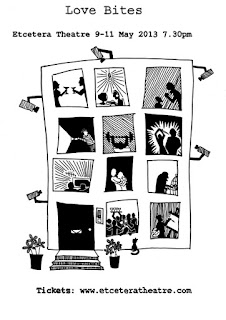 The first, Zoned Out by Craig Donaghy and performed by Thea Beyleveld was a monologue about moving in with a boyfriend who lived near Amersham and giving up her flatshare in West Hamstead, only to find out that he wanted to break up with her. It was frank and honest and knowing in a way that any Londoner could sympathise with. Actually judging by the nods and knowing laughs from the audience, it seemed like it could have been a shared experience between the character and many members of the audience.
The second piece Apartment 101 by Ziella Bryars was the interaction between a young lawyer Kate (played by Hannah James), and her flatmate's friend Zak (played by Samuel Dent) who is staying for a few days as he needs somewhere to live. There is a personality clash as Zak starts giving unwanted advice to Kate as she plans to catch up with an ex-boyfriend but over some herbal tea and a bottle of wine things change a bit.

The Favour by Jack Fiehn starts with a break up and then leads to a negotiated settlement and possible reconciliation. Orion Ben and James Rose play the odd couple who perhaps don't really belong together (perhaps we must assume they have - or had - a fantastic sex life).

The final piece St Sebastian is a slightly creepy piece about lost love and revenge. James Rigby as Joel still has issues with losing a girl at school over a prank played by Steve (played by Jamie Alderson) and has tracked him down to make him feel sorry.

Even if some are more successful than others, there is a real sense of comic timing and pacing each of the pieces and it is a real treat to watch. It is also worth reading the production blog which outlines the creative process and challenges with some of the pieces.

The series began in 2008 and has since produced over thirty new short plays. Their annual Love Bites show invites submissions on the shared theme of love, each time choosing a new location for the latest instalment in the series. So far the plays have taken place in a restaurant, a bar, a summer wedding, a Christmas office party, a hotel room and most recently a cocktail party. Throughout the year Love Bites also produces one-off nights of new writing and rehearsed readings. Love Bites is produced by Ziella Bryars with various collaborators. They are planning to stage more readings in future so check their website for their future plans. One to keep watching...