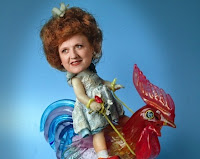 Eve Ferret, former 80's performer and occasional movie star has been doing the rounds in recent years with a series of different cabaret events at various venues across London. On Monday night this week she was at the Cabaret spot The Crazy Coqs in Piccadilly doing her thing.

Her thing has been described as part inspired by Miss Kitty Russell from Gunsmoke, but it could equally be part ingenue and part fishwife. You never know what you are going to get from one moment to the next watching her perform. It could be a soft soothing song or it could be something shouted at your general direction. It all adds a bit more thrills to a standard cabaret night out for sure.


The songs are mostly fun and mildly eccentric, written by others or her (or her music director Roddy Matthews). It was a generous evening of entertainment as she sang about twenty songs, interspersed with anecdotes and antics from her past. There was plenty of opportunity for audience participation as well with singing along, crowd surfing with a doll that resembles her (a first for the Crazy Coqs I gather) and ducking flying mangetout.

But the gags and general silliness come at the expense of the singing. When things calmed down (albeit briefly), with songs such as Scars it was an opportunity for her to show she has a great voice. But other times the voice sounded strained and the notes were not sustained as long as the gags. Hopefully future shows will focus more on the music making.

Still it was a lot of fun and hopefully Eve Ferret will become a regular on the cabaret scene in London. She is next appearing at the Soho Sanctum Hotel on 17 May. Or you can follow her on twitter.

Her show closes with the number Let's Talk Dirty to the Animals, which she points out got her the film job with Gene Wilder. Here's hoping her version is on YouTube soon... In the meantime, here is Alissa Hunnicutt talkin' dirty...