Rotten tomatoes and other leakage: Desperately Seeking the Exit 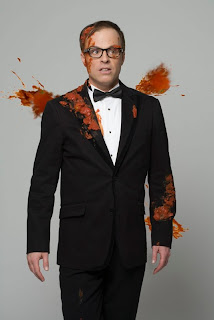 A few years ago, Peter Michael Marino managed to do what many people dream of doing. Without much trouble he managed to write a musical, get a producer interested in it and get it produced on the West End. It was 2007 and Desperately Seeking Susan had its debut on the West End with songs from Blondie.

Unfortunately the end result was that the show was a flop and the creative process left him exhausted. But he has managed to put the experience of the time into a one-man show, Desperately Seeking the Exist, which uses one of the less kind reviews of the work by Telegraph theatre critic Charles Spencer.

The show is a fascinating and mostly amusing recollection of the events in 2007 that led to the disaster. It works best when it is focusing on the anecdotes of the time, his struggles with dealing with the creative process and being a small part of a major production, and the toll it takes on his health (he develops internal hemorrhoids).


There are some hilarious stories as things go from bad to worse during previews.  A script doctor is considered and one writer is ruled out as he wanted the man waving about at the front - the conductor - removed as he was distracting... And once the show opens to negative reviews and there is no chance of any profit people desert the production.

A significant part of the show gets bogged down examining the differences between English and Americans and how that led to misunderstandings with other members of the production team. His own contribution to the disaster is curiously put down to just a pot-induced haze and his inexperience. As he points out most of the people involved in the production have gone onto better things including the director Angus Jackson who is at Chichester Festival this year.

Ultimately it is a great story and Marino tells it well (when he remembers it). And it feels like it could be a new chapter in Not Since Carrie, and definitely a fun hour for any musical theatre aficionados. You may even wish you had seen the original show...

It runs at the Leicester Square theatre until 20 May. Look for shows at Brighton Fringe and Edinburgh Fringe as well. First impressions on the show based on a movie based on a musical based on a boo with Johnnyfoxlondon follow...


listen to ‘Desperately seeking the boo’ on Audioboo