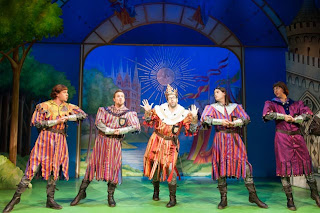 The new, slightly sillier version of Spamalot which has come back to the West End turns out to be almost like an out of season panto. Given the large number of families who were there to enjoy it during half term, perhaps the show really an awfully appropriate and a surefire way for cheap laughs in the West End.

In this revised production, a few scenes have been cut and songs trimmed and more topical references have been inserted into the lyrics. It now runs only two hours including the interval, and the end result is that it feels like a snappier and faster paced show. Even if the production values aren't as lavish, the naughty words are not as frequent, or the cast as large, I much preferred this version to its original West End run.

The show is loosely based upon (or lovingly ripped off from as the show calls it) the film Monty Python and the Holy Grail, which lampoons King Arthur's quest to find the Holy Grail in the middle ages. But all you really need to know is that it is a series of sketches and songs that send up the middle ages, knights, celebrities and musicals and is pitched at the same sort of comedy level as the Book of Mormon...
The young and energetic cast that appear in the show which helps give the show the right level of mild insanity. Even if one of the songs in this new version replaces the mildly baffling "You won't succeed on Broadway" with "You Won't Succeed in Showbiz" espousing the need for a star, this show works fine without one. King Arthur is younger here and played this time by Robin Armstrong, and makes more sense given that Monty Python were young when they filmed the piece...

If there is a star for the show, it is Bonnie Langford, who is returning as the Lady of the Lake after her successful stint in the role last year. It's a big role that takes the silliness to a whole new level with a need for a sense of comic timing overly dramatic singing. Bonnie was off as she was playing 9 to 5 in Leeds last week so that meant I saw the wonderful Sarah Earnshaw. Sarah's no little voice or wallflower either, but Bonnie is back in the show from this week.

Although some of the audience were a bit taken aback by the loose staging of the big disco number about Lancelot in the second act which looked like they were air bumming, this is mostly a family show with only occasional hints of naughtiness.

Spamalot is due to run at the Playhouse Theatre until November. Check the website for tickets.

As an update, comedian Joe Pasquale (opposite) is now in the role of King Arthur. Pasquale and Bonnie Langford starred in Peter Pan quite a few years ago and after they were reunited via Twitter (the lure of social media can be intoxicating).

Joe came to see her in Spamalot and following the performance, Bonnie suggested to the show's producers that Joe would make a great King Arthur... He is on for another month... Look out for two shows on Friday as well.