Testosterone at the Vaudeville: The West End Men 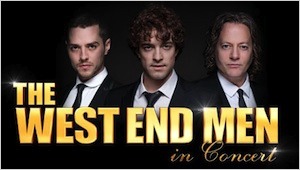 It's a slick and great sounding night out at the Vaudeville Theatre with The West End Men (not just any men obviously). This is a show that plays tribute to a host of musicals with both conventional and jazz-infused arrangements that had the audience cheering for more.

It's great to see on the West End a show that just focuses on making some great music, peppered with a little bit of banter and fun, put together in such a great looking show (and the men aren't that bad to look at I suppose either). It has been touring (including internationally) over the past year so the format it is not new. It is only on for a month but well worth seeing this testosterone charged concert that will blast you off your seat.
The men on the night I caught the show featured Lee Mead, Matt Willis, Glen Carter and David Thaxton. Lee who shot to fame with the show Any Dream Will Do, was probably the most known but the others were fine singers, performers and musicians too.  There were some problems last week, including a plea for understanding that Lee was not in best vocal form (he did sound like he was hurting something which didn't sound healthy) and so it was left to Thaxton to hit most of the high notes. Carter provided some of the comic relief, and Willis provided the rock sound (and the tattoos).

The men performed songs from the West End, Broadway and elsewhere, managing to enthral and entertain as they bounced over the stage. Sometimes they were dressed casually, other times they dressed up but each gave their songs a sense of musicality and style with their interpretations.

Things got livelier in the second half when there was a great West Side Story medley and a series of songs usually sung on stage by women. Then their special guest star Kerry Ellis came on stage. She stopped the show singing "At Last" then a duet with Lee Mead "As Long As You're Mine" and "Defying Gravity".

The programme lists a series of songs but thankfully it also notes that they do plan to mix things up a little and hopefully they do as it is a great sound and a lot of talent up there (both singing and the band). And perhaps something a bit more inspired than Bohemian Rhapsody could do for a finale...

The West End Men is running at the Vaudeville Theatre until 22 June. Glen Carter is in the show until 10 June and then Stephen Rahman-Hughes takes over.