Gospel, poverty and all that jazz: The Amen Corner 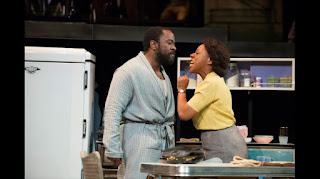 The Amen Corner, currently playing at the National Theatre is an uplifting and emotional play. Poverty, religion, hypocrisy, gospel singing and jazz feature throughout. But while it might be a predictable journey, what makes it special is the finely drawn characters and nuanced performances and observations about poverty, race and religion.

The piece focuses on fiery preacher Sister Margaret. As the play opens, she is about to go on a journey to Philadelphia to visit a congregation that needs her help. Yet her departure coincides with the return of her husband Luke and wayward antics from her son, who is staying out late with jazz musicians. Her congregation soon start calling on this hypocrisy and challenge her authority, which sets in motion a series of events that will pull Sister Margaret's world apart.
Gospel, provided by voices from the London Community Gospel Choir, and jazz comment on the action evoking the best of each genre and adding to the emotional intensity of the piece. But what is most captivating about this show are the performances, from the cast, particularly the female leads. It would be easy for the characters to be portrayed as caricatures, but this production throws enough shades of grey about for you to leave wondering if it all happened for the best...

For Marianne Jean-Baptiste as the fiery yet vulnerable preacher, it is watching her own personal spiritual journey as she forced to confront her past and reappraise it. Sharon D Clarke as Odessa, her sister, finds herself outmanoeuvred by her fellow church elders who see Sister Margaret's failings as an opportunity to change leadership. And for pious and virginal Sister Moore, played with great effect by Cecilia Noble, she balances the comic and cunning aspects of her character that makes her awfully likable.

The action is set either in the small chapel upstairs or the downstairs flat where a smart Fridgidaire refrigerator dominates the room. Apart from being eye-catching, the refrigerator dominates the discussion as her impoverished congregation look at it with admiration and envy. This is a play where poverty is at the heart of every discussion and religion seems to be way of both making sense of the world, and rising above it all. It is easy for London audiences to feel slightly smug about a play where the characters greet each other with, "praise the Lord" instead of "hello." But as the play progresses it is clear that they aren't just clinging to religion without reason as their choices in life for each character are limited.

Catching an earlier rehearsal of the show, many of us after seeing it were struggling to recall when was the last time this play was staged in London. It may have been in the 1970s, but even then we weren't so sure.  It is an early piece from James Baldwin and no doubt draws on his own experiences as a preacher and the power and theatrical seduction of the church. The work has been musicalised but here gospel and jazz support the work rather than are integral to the story.  This new production gives a fresh and lively perspective on the work in an era when religious fervour and economic poverty still co-exist, but perhaps in different guises to 1950s Harlem...

The Amen Corner runs through to mid August and is part of the Travelex £12 Tickets. More information on the show and the creative process behind making it is included in the clips below.