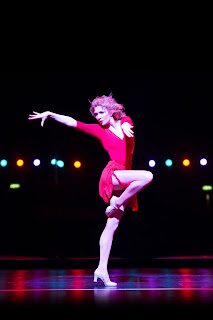 Prior to it completing its run next weekend I finally caught A Chorus Line at the Palladium. It's a simple and slick fly on the wall show about dancers wondering if this is their last shot on stage as they progress from auditions to the opening night. It is hard not to like a show with such heart and thrilling performances.

The cast are pretty good and the production is rarely dull, with its classic Broadway songs and classic theatrical set pieces. It is hard not to like Scarlett Strallen (one of the omnipresent Strallens and pictured opposite) dance and high kick her way through the Music and The Mirror as she desperately wants a job. Or see Olivier award-winning Leigh Zimmerman as Sheila, the very late twenty-something dancer who is wondering how long her run will last...

At times it is exhausting to watch the cast as they are on stage for nearly two hours (without an interval). And if it looks like hard work, that is probably because it is.


A Chorus Line won nine Tony Awards and the Pulitzer Prize for Drama when it opened on Broadway in 1975 and went on to become the then longest running musical on Broadway. It features some of musical theatre’s best known songs: One (Singular Sensation), What I Did For Love, I Can Do That, Hello Twelve, Hello Thirteen, Hello Love and Hope I Get It.

It is now a period piece rather than a contemporary piece of work. But all the elements combine to transport you back to Broadway in 1975 (although perhaps back then the music wasn't so amplified and there was less reliance on body microphones that did not always work). Maybe its closing suggests people are less clear about the relevance of this work today, but even if the world of theatre has changed, at its heart is a story about life that is personal and insightful which is hard to find elsewhere in a commercial musical nowadays.

This revival closes next weekend and well worth looking for last minute discounts if you have not had a chance to see it. The last week in August is a good time to get great seats for shows at bargain prices.

European touring plans for the production are to be finalised but are expected to include Germany, Holland and France, prior to a UK tour beginning in Autumn 2014. There are rumours that there will be a new recording of the show featuring this cast and songs cut from the show as well.