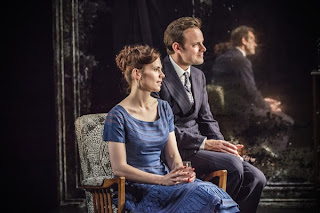 The Pride is a thought provoking and somewhat topical piece of theatre and serves as a reminder of how rights and freedoms now taken for granted in Britain were non-existent a little over half a century ago. The past and present co-exist to tell a story about love and boundaries.

The play evolves around a complex love triangle and alternate universes between 1958 and 2013 involving the characters of Philip, Oliver and Sylvia. In 1958 Philip and Sylvia are in a loveless marriage and Oliver is Sylvia's boss. Through chance encounters and secret meetings Philip and Oliver start a relationship against a backdrop of fear and shame. In 2013 and Philip and Oliver are struggling in a gay relationship and it is Sylvia that plays a role in putting the two together.
The contrast between the shame and guilt of the characters in the 1950s to the wild crazy hedonistic ways of the present day is the strength of the piece. The characters from the present day would be somewhat unsympathetic without harking back to how they would have existed half a century earlier. But it is the power of the piece that keeps your mind comparing the two and reflecting upon each world and its relevance to such events as Russia's recent crackdown on gay rights.

The acting is superb with all three performers moving seamlessly between periods and characters. Mathew Horne plays three other supporting characters and is a source of much (sometimes unexpected) comic relief. The production here seems to focus on the journey of Philip played here by Harry Hadden-Paton and his journey from denial to violence and acceptance makes this piece exciting theatre.  Hayley Atwell as his wife or best friend also gives this play its freshness. It is not a boys own adventure so it is a relief her characters are not tragic figures but essential in the proceedings.

It is a minimalist set, with only a distressed mirror and some clever lighting used, but what matters here is the performances and they keep you transfixed for most of the time. Except perhaps when you mistake a characters glare in your general direction and commenting about an old queen they can see for your fellow theatregoer @johnnyfoxlondon. The ensuring sniggering (well... mine anyway) was a temporary distraction (for me) until he hit me with his water bottle.

There was also the very tight seats of the Trafalgar that seemed to make you rub shoulders and other bits of your body with your neighbour. Of course it was an opportunity to ask the young straight couple next to me whether they were on a date watching the play... It wasn't quite but we did have a fascinating conversation about how sexuality is no big deal these days. Unless of course you are in Russia. The cast remind us of this point by coming out with To Russia, With Love placards at the curtain call. The layout of the theatre leaves a lot to be desired as well with it being necessary to enter from the back of the theatre if you happen to have tickets on the "wrong side"and even in the light heat, the theatre struggled to cope with adequate air conditioning.

Opening night video footage follows. The Pride by Alexi Kaye Campbell and directed by Jamie Lloyd as part of the Trafalgar Transformed runs through to 9 November and is an unexpected and refreshing treat. Just wear shorts and a t-shirt and be prepared to be touched... by the play and the person sitting next to you...

Post show rambling reaction (where I promised not to talk about the old queen off in the distance) with @johnnyfoxlondon as we walked down Whitehall... Much to the bemusement of the policeman outside Downing Street...


listen to ‘Pride boo: The Pride at Trafalgar Studios’ on Audioboo