Wishful thinking: The Last Ever Musical 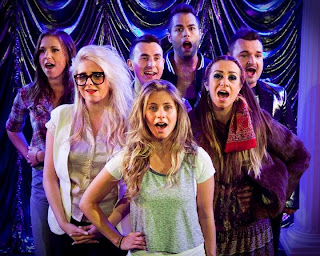 Most new musicals these days are just a string of old songs cobbled together to make a not very good show. They are probably best enjoyed if you don't understand English too well so the flimsy plots and melodramas can be mistaken for something more profound. But of course nowadays most of the time the fun is really in going out to the theatre and having a night out rather than watching whats on stage... On the fringe scene, musicals are usually an opportunity to see a work that isn't going to get a commercial run, or something cheap to mount - like Jason Robert Brown's Last Five Years or I Love You, You're Perfect, Now Change - and more fun to be in than watch...

With this in mind it was intriguing to go and see the new piece, The Last Ever Musical at the White Bear Theatre in Kennington. It is a new piece by Simon James Collier and music by Richard Bates. It attempts to be a musical that's a tad offensive and vulgar and send up some of the London fringe theatre scene, where people work hard for profit share and not much creatively or economically comes out of it.


The premise is a small-time fringe producer finds himself about to stage a show with a sponsor who makes feminine hygiene products. It's a musical about a musical and the ups and downs of putting on a fringe show in London and the people who work in it. The musical he is to stage will be his last (rather than the last ever musical) so the title of the show does get your hopes up if you are not a fan of the genre...

The music is quite fun and there are some terrific tunes that are sung with energy and excitement. But the subject matter about staging a show around feminine hygiene products and thrush is less funny than it should be. The cast also seem too cute and sweet looking to be saying dirty words and being dressed in bondage. It is more fun when the comedy is a little sweeter and slightly barbed rather than coarse or vulgar.

The music is quite good and there were some wonderful parodies of musical styles here.  During the audition phase each actor sings from a song that sends up a composer (such as Jason Robert Orange and his song "The Last Twenty-five Minutes"). The songs distilled the essence and excess of the composer for hilarious results. It would be nice to hear these songs again in future - perhaps even just as a music revue - but when the lyrics aren't about tampons. Besides, as @Johnnyfoxlondon quipped leaving theatre, "Didn't Shaw already write a show about thrush?"

The White Bear Theatre is also a great little theatre pub with some real offbeat and quirky shows on their lineup. Just dress casually as it gets a bit hot inside... The Last Ever Musical runs until 7 September and tickets can be booked through their website.