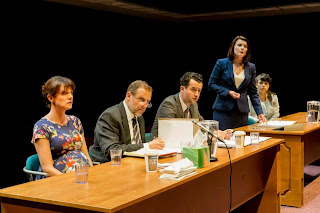 Nick Payne's latest play at the Donmar, Same Deep Water As Me looks at the world of personal injury lawyers and the people who make false claims for accidents. It seems to be an attempt at farce but mostly comes off as a muddled soap opera that alternatively tries to be funny and make some serious points about sacrifices in the modern economy. None of it really works even though the cast are excellent and try their hardest to make sense of the material.

In the first half we are introduced to Andrew (Daniel Mays) and Barry (Nigel Lindsay). They are two struggling 'no win no fee' lawyers in Luton and business is a bit slow. Then Kevin (Marc Wooton), who is an old school friend of Andrew's, appears with a story about a crash with a Tesco delivery van. I could explain more but the problem with this piece is that by the time the set up is made the audience know what is going to happen. The comedy is mostly derived from attempts to make jokes from class differences and coarse language. But the best laughs come from the situations such as when Kevin's heavily pregnant wife has to take the stand at Luton County Court and promptly throws up.


Some people loved this show, including a few critics, but I felt the show was really only funny if you liked watching working class characters swear and say dumb things. There was one woman in the audience who was laughing so much at the piece she was like a one-woman laugh track for the performance. Judging by the faces of the people around her we could only wonder what she had for dinner and wished it could have been something similar...

Of course being a Donmar show there are some very appealing elements of the piece. The set is a fantastic recreation of grim office right down to the claustrophobic false ceilings and battered desks. There is also a wonderful joke that is told without ever giving the punchline. But at two hours this play is too slow to get moving and has about three endings without offering much insight into any of the characters. It was notable that some people left at intermission. They were sitting near the crazy laughing woman in the audience so that may have been a factor but the piece might have been better if it were shorter and a little less dramatically obvious.

The Same Deep Water As Me runs at the Donmar until the end of the week.