October 14, 2013
David Breuer-Weil, who earlier this year was exhibiting in the vast cavernous spaces under Waterloo Station is back with a new show at two art galleries in central London called Heaven & Earth. The volume of his output and ideas at the moment shows with the range of new pieces presented.

The exhibition is intended to be shown in two separate spaces, and serves as a contrast the themes on display between the near (Earth) and the far (Heaven).  Across both you will see Breuer-Weil's usual themes of the environment, a sense of belonging and enlightenment throughout. Where the familiar becomes surreal and subjects are found in strange and interesting positions... Sometimes it is as if they are in orbit.

I started off with Heaven, at Alon Zakaim Fine Art. There you see a number of large canvases depicting people and objects revolving around central star motifs or figures curled up in foetal positions evoking conception and creation.

Moving upstairs in the smaller space of the gallery  there are bronzes and smaller paintings where the intention is to be reminiscent of photos taken by satellites and telescopes. Heaven is presented here as something humans have a relationship with already rather than some distant place or concept, but the effect is sometimes a little surreal.

Leaving the gallery and a short walk down Dover Street, with a left and a right turn thrown in (you probably would not want to do this on a wet day... or after too many fine wines at a private viewing night), I found myself back on Earth, at E&R Cyzer. Here the works are examining the limits of existence. Alien which depicts a human figure with its head submerged in the ground is presented here, along with figures emerging from the ground in a Stonehenge-like pattern. They are fascinating and evocative pieces - human and funny - yet delicate as well. 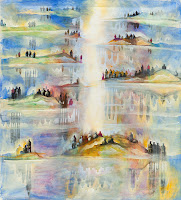 Smaller paintings showing figures falling or emerging from the earth are also here. Downstairs at the lower gallery is Islands, a series of paintings that are depicting a impersonal, swamp-like world dominated by a single colour. The figures in the painting are washed out and subordinate to the environment around them.

London-based Breuer-Weil is known for his large painted canvases. His giant sculptures have appeared across London and the UK in places such as Grosvenor Gardens and Chatsworth House. While there are the larger canvasses here in both parts of the exhibition, his newer work is tending to be smaller, more intricate and detailed. The contrast is intriguing and enlightening. If his previous exhibitions highlighted the power of his large canvasses, it is the smaller pieces here that stand out.

The exhibition runs until 15 November. Heaven is at Alon Zakaim Fine Art on Dover St,  Earth is a show at E&R Cyzer on Bruton Street. Worth a wander and a look.