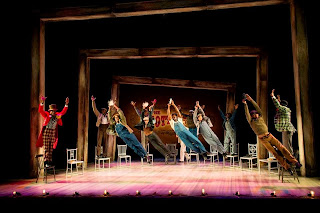 A musicalisation of a forgotten case of injustice in America's south seems like it could be a heavy night at the theatre. But the Scottsboro Boys which is now playing at the Young Vic near Waterloo, manages to be brisk and entertaining, while making some sharp observations on injustice and romanticism of Americas south. With a great songs by Kander and Ebb and some thrilling choreography by Susan Stoman it should not be missed.

The story of the Scottsboro Boys revolves around nine teenage boys who were accused of rape in Alabama in 1931. They were found guilty and sentenced to death but with the support of  the American Communist Party a series of retrials ensued over the course of the following decade. The story is presented in the format of a minstrel show, where the cast are entirely black, with the exception of the interlocutor / master of ceremonies, played by Julian Glover. The interlocutor gives the show the device to pare this complicated story back to its bare bones and keep things moving at a pace that delivers the show in under two hours (and no interval).


The music - the last collaboration between John Kander and Fred Ebb and first presented Off Broadway in 2010 - is a clever pastiche of minstrel styles that evoke and occasionally bitterly parody the false romanticism of the south. As the boys are forced to sing a romantic song about "the honeysuckle days in Alabam", the lyrics shift to lynchings and cross burning. It isn't particularly subtle but in the context it is beautifully effective.

Directed and choreographed by Susan Stroman, the dance sequences are particularly thrilling visually but also are an essential part in detailing the story. The cast are exceptional in their ability to dance, sing and convey a particularly emotional story amongst the archetypes characters that are part of a minstrel show. Some of the original cast from the original New York production reprise their roles here as well. 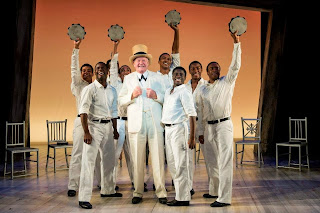 Overall it is a unique and interesting piece of musical theatre that will make you want to find out more about the story behind it. The search for justice for the real Scottsboro Boys continues to this day as Alabama looks to clear various legal hurdles for posthumous pardons of the men.

While overt racism, and Jim Crow laws may have disappeared since when this story was set and even landmark court rulings made, other things may not have changed that much. The story serves as reminder that in England there are plenty of stories about people suffering from treatment by the police, our press or our justice system. Kander and Ebb and director Susan Stoman were inspired by reading the case history to turn this into a musical. Perhaps we need a similar creative team to be inspired by reading reports from the IPCC to do the same...

This show has turned out to be one of the Young Vic's more popular shows this year with its run extended until 21 December. Be quick to grab a ticket... If there are any left...