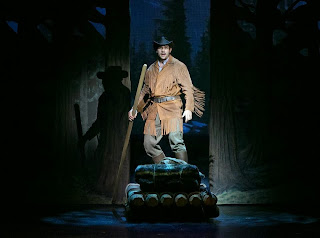 Seven Brides for Seven Brothers stopped at the New Wimbledon Theatre this week. Its a fun, loud and incredibly energetic production with a terrific cast that will keep you entertained for its two hour run.

Based on a parody of the Roman legend The Rape of the Sabine Women, called The Sobbin' Women, it is set in Oregon in 1850. Adam (Sam Attwater), the eldest of seven brothers, goes to town to get a wife. He convinces Milly (Helena Blackman) to marry him that same day, as she has no family of her own. But on their return to his backwoods home she then discovers he has six other brothers, all living in his small cabin. Milly sets out to reform the uncouth siblings, who want to get wives of their own and she sees it as a way to get them out of her house. After some basic lessons the men head to town for a local dance and to meet some women. But find that all the ladies are spoken for. Returning back home and feeling down, Adam inspires his brothers after reading one of Milly's books about the Roman capture of the Sabine women, to kidnap the women they want.


What could be a distasteful story is handled well by focusing the story on Milly and the six other brides. It is more like seven beauties and their beasts. And there are some nice observations about the men who work the land for a living and the boys from the town who look down on them. While the story is predictable, the star turn from Blackman and some incredible dancing sequences will take your breath away. There is so much energy and enthusiasm on stage from this cast that it is hard to know where to look. 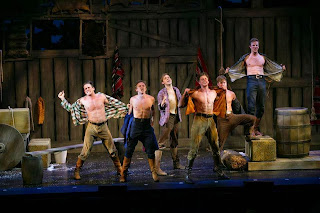 The staging is simple yet fun with various tree-effects and log cabins flying on and off stage. Attwater is a very charismatic Adam and manages to still look manly in various fringe jackets and beaver hunting attire. The colours are bright and there is also a chance for the men to go bare chested at times. No doubt men had to be fit to work in this rough terrain in 1850s Oregon, although it might be hard to believe they could have been this well ripped (unless they they had to dance this hard back then too).

While it feels like it should be a classic stage musical, it originally was a movie musical from the 1950s with Jane Powell and Howard Keel. It was turned into a stage musical in the 1970s but seems to have struggled to be a success until recently. This production makes for a fun and unforgettable evening. But I dare not say break a leg to the cast for the rest of the run.

Seven Brides for Seven Brothers completes its run at the New Wimbledon Theatre tonight and is off to Manchester next and then other dates through to 2014. If its at a town near you, it is worth a look.

First impressions outside the theatre with @Johnnyfoxlondon follow, where we talk about energetic dancing, bears and bare chests in 1850s Oregon.