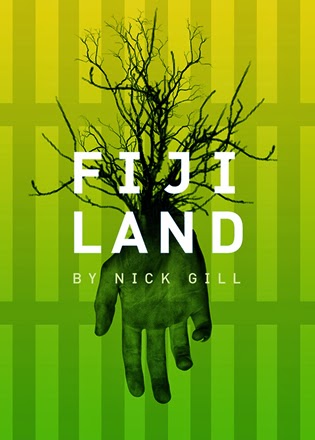 Torture, boredom and having strange things done to plants are explored in Fiji Land, a thought-provoking piece currently playing at the little space within Southwark Playhouse for a short season.

The title comes from the testimony from a Professor Ali Shalal, who became a symbol for the torture at Abu Ghraib after catching the interest of the New York Times and it mistakenly attributing him as the man hooked up to wires and a black hood. His testimony describes a part of the prison in open space and made up of five sectors, surrounded by walls and barb wire as Fiji Land, where anything could happen.

The play is a short piece about what happens when cell doors are closed and nobody else is watching. You walk into the little space within the Southwark Playhouse to be greeted with what looks like a cross between a cold storage facility and an indoor plant growing facility. Unsure about what the next eighty minutes had in store for us,@Johnnyfoxlondon and I opted for seats towards the back of the theatre where we assumed soil and other organic substances wouldn't fly too close to us.

But it soon become apparent this a little less physical (at least in the beginning). Three actors carry out orders and mundane tasks that build over the course of the piece into something a touch more sinister and evil.

While it is slow to build, it has impressive young and intense cast that keep things slightly off balance yet evocative of some of the banality and crimes committed at Abu Ghraib. As the story moves along Jake Ferretti as Grainer is too hot looking after the plants and cannot keep himself cool enough.  Matthew Trevannion as Wolstead finds himself too cold and finds himself building an igloo to stay warm. Meanwhile Stephen Bisland as Tanc and the man seemingly in charge has an unhealthy attraction to some of his captors. The contrasts keeps the audience guessing what is real or imaginary.

I would have preferred it perhaps even to get crazier and pick up accounts of abuse with implements, shock treatment and the like. But it certainly is an original piece by writer Nick Gill. Fiji Land was first seen as staged reading at the Soho Theatre in 2007 and it was a finalist in the inaugural Amnesty International & Ice and Fire Protect the Human competition. It is great to see it get a slick and surreal staging from Three Streets Productions at the Southwark Playhouse.

Fiji Land runs at the Southwark Playhouse until 8 February 2014. It is 80 minutes without an interval and has torture and scenes of sexual abuse towards potted plants. What a way to start the theatrical year...