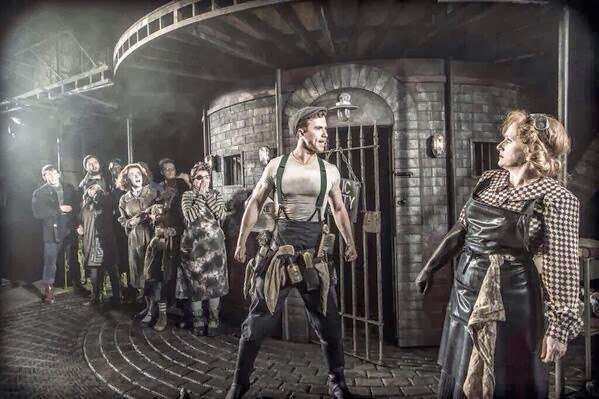 The star power of its cast and wonderful production design make Urinetown the Musical a show to catch for its short run. Just don't expect a happy ending... Or pleasant subject matter. It is an anti-musical so it turns the genre upside down and parodies everything, including itself. The cast have an incredible energy and in the the intimate space of the St James Theatre their enthusiasm will have you hooked.

The piece is set in some dystopian city where a severe drought has made private bathrooms unthinkable. People have to pay to go to the bathroom. If they don't pay to pee, they get carted off to this mythical place called Urinetown... And are never heard of again.


The hero and toilet attendant is Bobby Strong (played by a heroic-looking and well-equipped Richard Fleeshman). After watching his father get taken away for not being able to pay to pee, he decides to lead a revolt so people can pee for free. He is up against a large private corporation headed by a ruthless man known as Mr Cladwell. Cladwell effectively runs the town after cutting a deal with the politicians to solve their water crisis if they "looked the other way"... But before Bobby leads a revolution, he meets Mr Cladwell's daughter Hope and falls in love... Well it is a musical after all.

If you have not worked it out by now, it is an incredibly silly show. But the piece knows it and does not take itself too seriously. It is narrated by the slightly malevoloent Jonathan Slinger, who plays a cop who delivers swift justice to those who cause trouble. He is accompanied by a character called Little Sally (Karis Jack). They break the fourth wall frequently making fun of the plot and the subject matter.

Even if you feel the music and storyline veering into some cheap university review, the energy of the cast, or the inventiveness of this production lifts the material to a new level. The sight of Jenna Russell wearing goggles, a long black rubber glove and brandishing a plunger is an image that will linger in your mind for some time. Particularly if you are sitting in a seat that puts you at eye level with her...

The idea for the show came about after writer Greg Kotis had a poorly organised trip to Paris in the mid nineties and found himself getting caught short. One can only imagine what he would have had to have done if he found himself caught short in central London, where public toilets today are 50p no matter what you do int them. It was first staged in New York in 2001 and has taken some time to get here, but what could have not aged so well has been worth the wait.

The post show Audioboo details some of these ambivalent first reactions with @johnnyfoxlondon and @webcowgirl, but in the days since the show I found it hard to resist humming along the songs to "It's a privilege to pee" or the rousing gospel number in the second act. It may not be Rogers and Hammerstein but its still important as it is fun and unique... Tickets for its short run are bound to sell out so catch it if you can...


listen to ‘Urineboo: musings on Urinetown’ on Audioboo