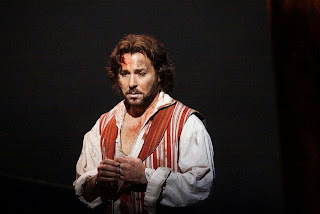 I've seen this production of Tosca three times now at the Royal Opera, but this was the first time that the affair between Tosca and Caravadossi seemed so intense and palpable. And sexual.

A melodrama over three short acts needs big voices and a big sound to carry interest in this piece of a jealous actress, traitors and fear of invasion by Napoleon's army.

Set over three days the story is a gripping tale of love, torture, treachery and one big diva.

With Roberto Alagna as Cavaradossi and Oksana Dyka as Tosca, the pairing of big voices and big actors matches the intensity of the score and the drama. And together they complimented each other well with their clarity of voice. 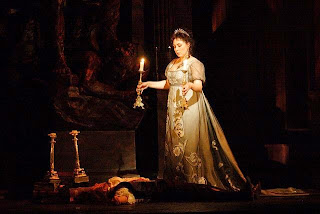 Rounding out the love triangle as Scarpia, the Chief of Police, Marco Vratogna aided the second act with added menace with his baritone that while not booming as in other performances, conveyed menace and emphasised the pure over the top potential of the subject matter.

Roberto Alagna's performance of E lucevan le stele in the third act was perfection and evoked the sensuality and tenderness of the lyrics (so much so the mind was wondering about just how much he was caressing Tosca).

A production that puts spring in your step. There are performances throughout the summer...