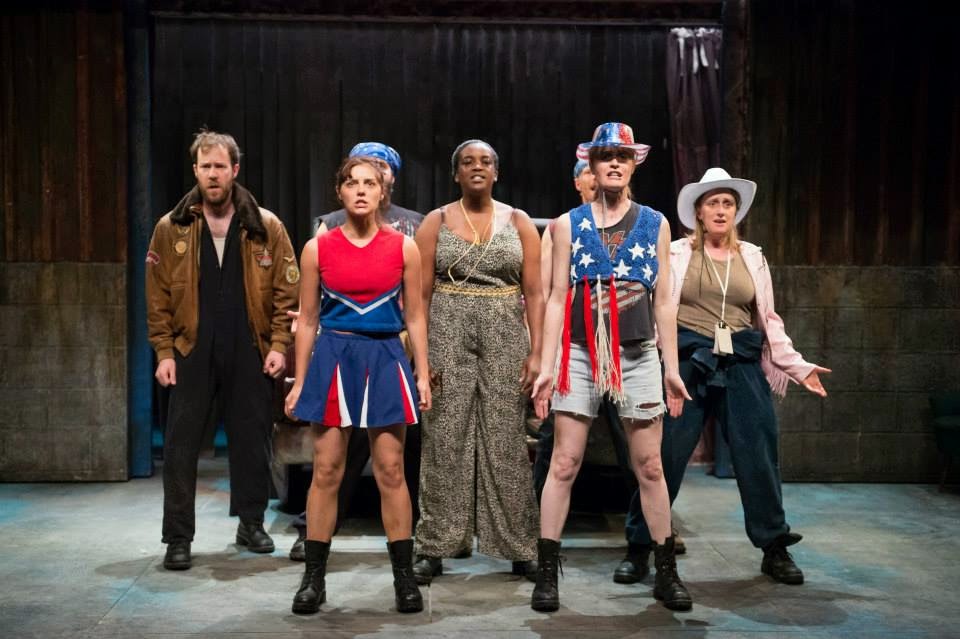 Storytelling and pop culture is at the heart of Mr Burns, a bizarre and fascinating play currently showing at the Almeida Theatre.

Is it an observation of what would happen to our society if it collapsed, a commentary on the evolution of a new religion, or an observation that people in catastrophic times would prefer to talk about anything other than the elephant in the room?

Whatever its point - and it is more weird than funny - it is a fascinating piece and and enthralling throughout its three distinct acts.

The first act opens with a power cut. Set in a post apocalyptic world where the power grid has failed, there is no electricity and society has failed, those that have survived pass the time by recounting their favourite television shows. And of course the one television show that people remember the most is The Simpsons. And in particular the Cape Feare episode.
Over a camp fire (which is the only source of the light so be prepared to dark adapt your eyes) people sit around and talk about the episode, trying to remember the minute details of it. Their memories of the show are fragmented. Some of them remember the show differently. But as they try and remember parts of the episode they also talk about what has happened. We begin to learn as they talk that cities have crumbled, people are missing and presumed dead.  We also learn that many of the group performed in amateur dramatics.

The second act moves thing forward seven years and it turns out without electricity what people crave for is for actors re-enacting their favourite television shows. Lines people remembered from these shows become the new currency and its a cut throat world. The bewildering extent that the group goes to attempt to recreate The Simpsons and television commercials while existing in a lawless space comes together in the final moments of the act.

The final act imagines a storytelling group seventy years after the the first act which (without giving anything away as it is something to be seen) takes the absurdity to a logical conclusion.

The Cape Feare episode of the Simpsons first aired in 1993, is parody of pop culture and sends up the Scorsese remake of the film Cape Fear, along with horror and thriller films. It is important to at least know this. In some parts of the world it is regarded as the best Simpsons episode ever but perhaps its cultural significance is lost in travelling across the pond. But there are other references to songs by Britney Spears, Ricky Martin and others. If there is a comedy from the piece it is the humour derived from elevating pop cultural to some higher level of cultural acceptance.

But for some Almeida Theatre goers I suspect they are less aware of such pop cultural references. Each act saw a diminishing number of people in the audience, but for those who were curious about the work it had its own rewards. This show received great reviews when it played in New York, but I suspect it will get more of a Marmite reaction here.

Mr Burns has its European premiere at the Almeida Theatre and runs through to the 26 July. Be prepared to be baffled and bewhildered.