Looking in the round back: Orpheo @TheRoyalOpera 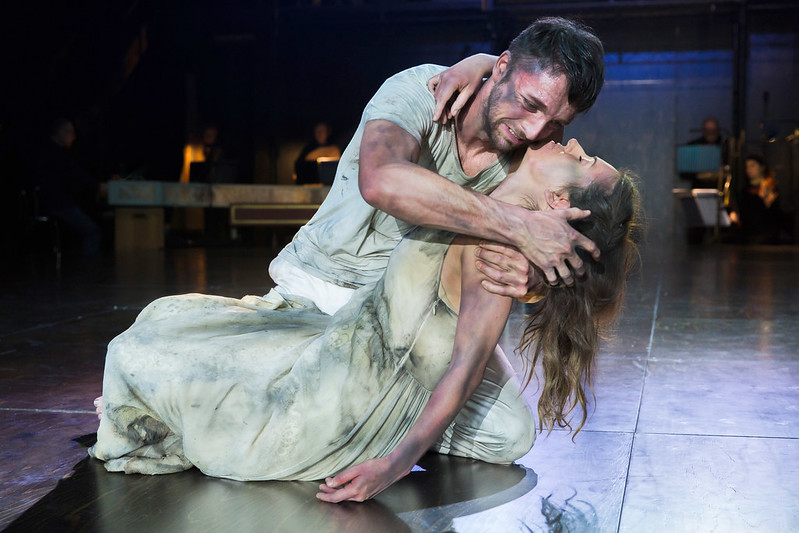 The Royal Opera and Roundhouse joint production of Orpheo is a surprisingly fresh and lively interpretation of Monteverdi's early opera based on the Greek legend of Orpheus and his attempt to bring his dead bride Eurydice back from Hades.

When you first enter the Roundhouse, you know you are going to be in for something a little bit different from both companies. Apart from a large circular stage that is thrust forward, there is a giant ramp and seating surrounding it all. You don't normally see that in the Roundhouse where most concerts are standing room only affairs.

As the music starts the performers descend down the ramp and take their places as if it were a royal court - with Pluto and Proserpina taking seats at the high gallery. It evokes the origins of this piece as court entertainment, but also as if you are watching Greek theatre. And it gives a sense of intimacy to this large venue.

There is also a religious theme running throughout the production with performers in various religious robes. But the ultimate strength of this production is the fine music making by performers and musicians from The Early Opera Company directed by Christopher Moulds.


As Orpheo and Eurydice, Mary Bevan and Gyula Orendt are both vocally and dramatically thrilling to watch. Orient’s strong and expressive vocals bring such emotion to the role. His glance behind to see his wife as he ascends the ramp out of Hades is dramatic musically and theatrically.

Also thrilling are the final climactic scenes where he is received in heaven, suspended above his wife and just out of her reach as the chorus sings the finale. It is dramatic and a bit disconcerting watching Orendt wriggle and writhe about in a sling as if he were a trapeze artist rather than a opera singer. Perhaps it indicates the future demands on our opera performers - not only will they have to sing and act but also master death defying feats of acrobatics.

Elsewhere the production benefits from simpler staging, some clever placement of sound boards and some barely perceptible amplification. The use of the ramp is particularly effective as both a device to indicate descent into the underworld and the exit from it. It no doubt was an added dimension of hell for the performers who had to use it. I was hoping they all had their best sensible shoes on.

Joining the performers are dancers from East London Dance. In the first half there is a little too much cacophony distracting the music making, but their interventions as we descend into Hades become much more subtle and effective. The structure of this work means that story is more engaging in the second half anyway for those struggling with this early Baroque piece (and its clever old-but-new English translation).

Performances run until 24 January with limited availability. One not to miss.

Photo credits: production photo of Gyula Orendt as Orfeo wondering if he should look back. Photo by Stephen Cummiskey. 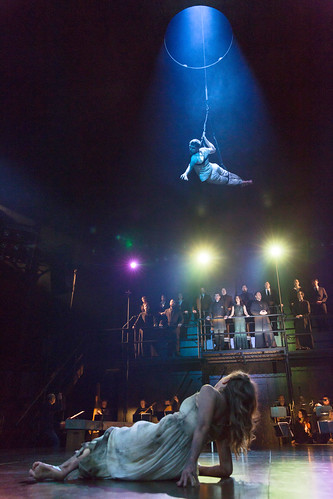