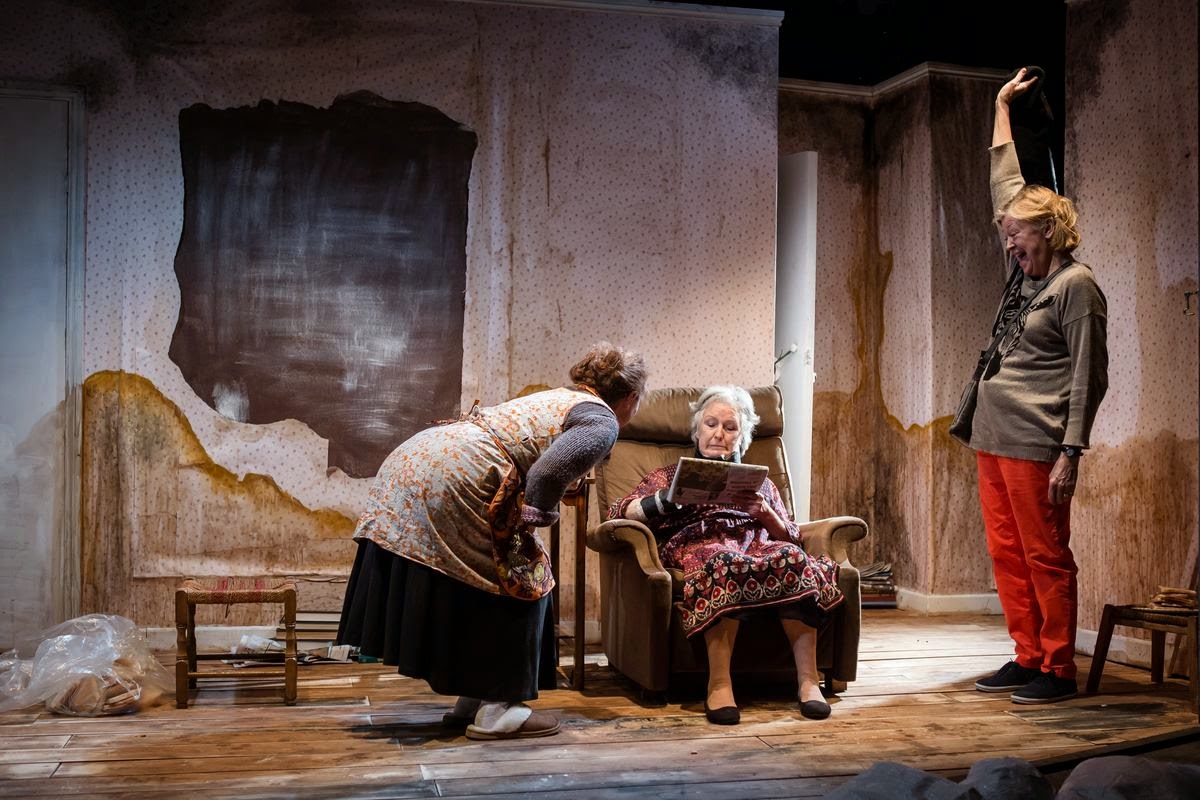 There is something dark and unsettling about Animals, a brilliant new play by Emma Adams at Theatre 503. Its frank humour and intense performances from a terrific cast will have you loving every minute of it. It might also have you wondering what your grandmother really gets up to when she tells you she spent most of the day finishing a crossword.

This surreal story set in a dystopian English seaside town where the old people are being displaced by incomers who dress smartly and keep their children in bubble wrap. For them life is a dream. But for anyone past their prime, life is pretty grim and involuntary euthanasia is the norm. Of course some people still manage to get by. Norma, a stubborn yet resourceful old lady who told authorities she is 37 (when she is 77) spends her time filling in crosswords to win prize money and hiding from the rest of the world. Played by Marlene Sidaway, she seems to be your typical older lady, sweet, a bit demanding and grumpy, perhaps even a bit vulnerable, until you realise just how resourceful she can be.

There is Joy, Norma’s carer (played by Sadie Shimmi). She manages to be Norma’s link to the outside world who pulls enough favours and hand jobs with the right men in the right positions to allow both of them to get by.

Then there is Helen, their neighbour (Cara Chase). She was an incomer once but after years of spying on her, Norma and Joy trust her almost enough to be friends with her. She too is resourceful enough to have the right connections to have a steady supply class A drugs that keep her youthful and active. 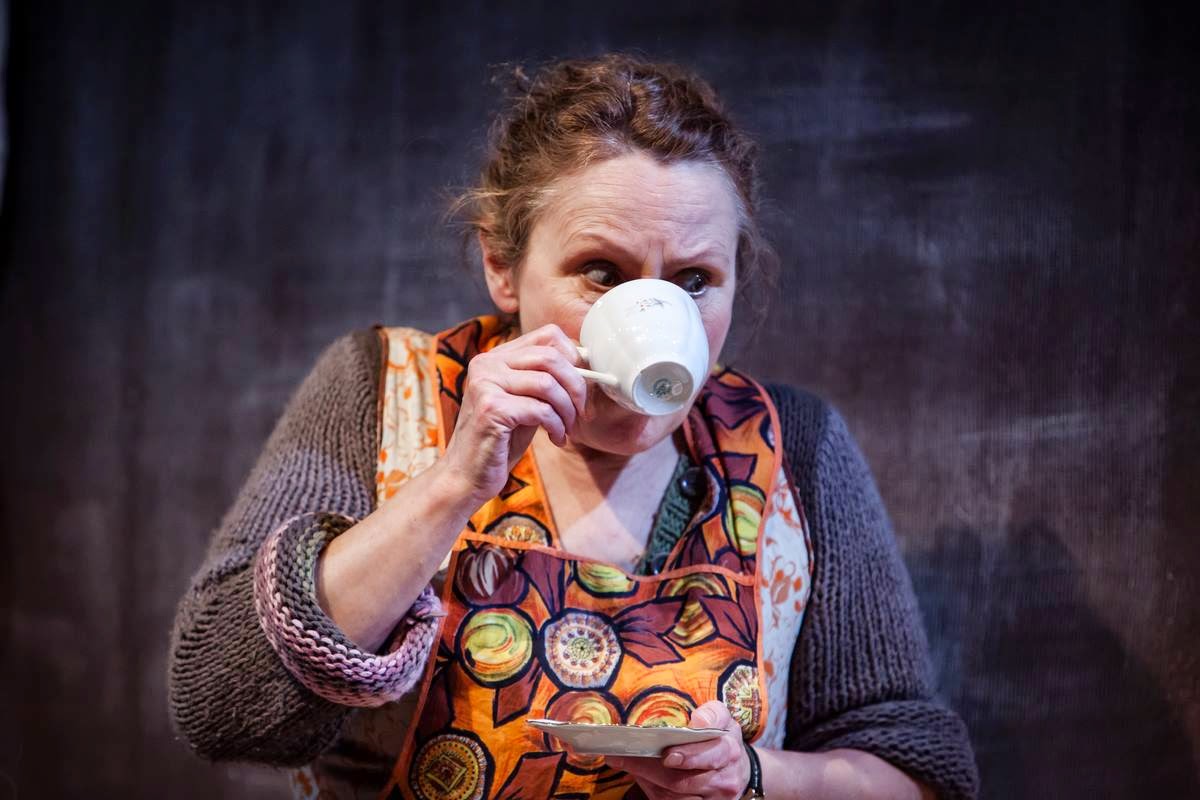 Children in bubble-wrap is not a metaphor here. In their bubble-wrap jackets they learn at school that old people are bad and they should only think of happy things. We are introduced to Maya (Milly Thomas), who is about to turn 18 and will need to take her “exams” so she can transition to adult life. Her dad (Steve Hansell), a utility inspector, is worried that she isn’t going to make the grade since she has too many independent thoughts misses his comfort woman.

By chance, Maya stumbles upon the three ladies. Norma and Joy see her as a windfall, but for Helen she reminds her of her daughter who cut ties with her unexpectedly.

The piece takes the excesses of modern life to the extreme with some frank and very funny observations. Whether it is euthanising utility inspectors on zero hours contracts or young people needing on to only think happy thoughts, this is a dystopian world that is twisted not too far from present day. Under the direction of Lisa Cagnacci, the piece deftly moves between drama, humour and occasional horror.

And in a week when some lady in her fifties sent the internet into meltdown over kissing a younger man, the observation that people (particularly women) become useless at the age of 60, does not seem too far fetched.

It serves as a great vehicle for the three leading ladies of the piece, giving us a chance to see their wonderful comic interpretations of women on the edge who are capable of anything in a nan eat nan man eat man world. The horror is more implied than shown on stage, but leaving things to the imagination makes it lovely and creepy.

Even for a dystopian world, it is a wonderful looking production designed by Max Dorey. A flat with flood marks, unusual stains on the floors and walls, and ever pervasive mould never looked and felt so unpleasantly evocative.

Animals at Theatre503 runs through to 2 May. Don’t miss it. 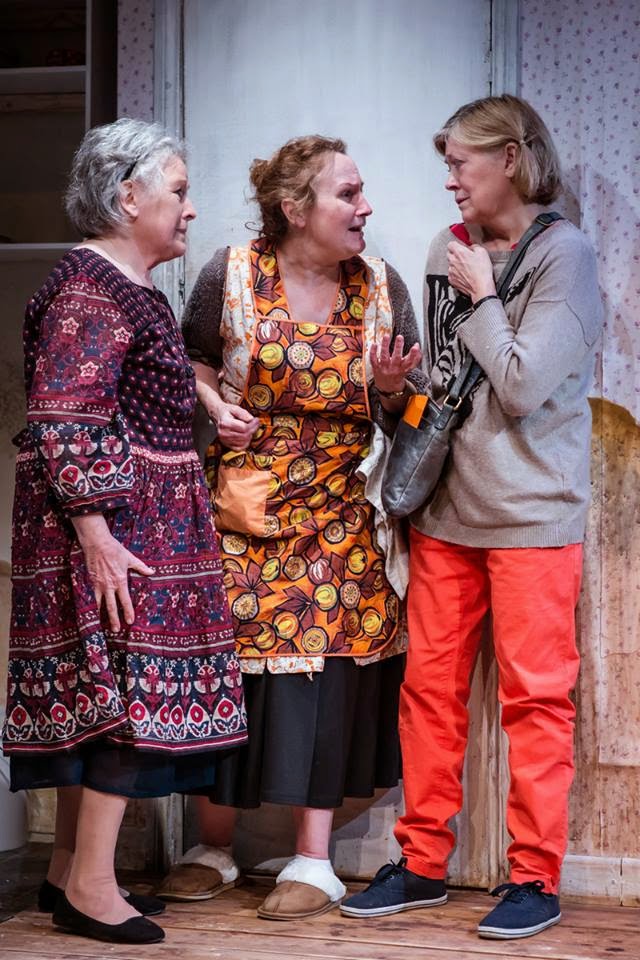