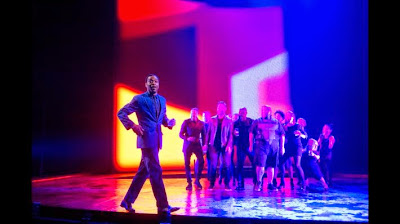 Judgement day and getting taken to the cleaners takes on a new meaning in this spectacular new take on the classic fifteenth century morality play Everyman at the National Theatre with Chiwetel Ejiofor.

It feels like every theatrical trick is deployed during the roughly ninety minutes it takes for one man to account for his life. There  is a giant video screen, dazzling lights, a urinating penis prop. It’s all terrific stuff and an awe inspiring updating of the tale to modern and secular London. 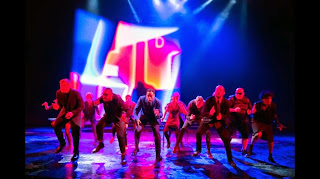 Everyman arrives at his fortieth birthday party entering from the rooftop (the reasoning becomes apparent later) and then scenes from a birthday party, choreographed with intense fury and relentlessness (by Javier de Frutos) go some way to explain his hectic, crazy and slightly debauched life. This a high net worth  alpha-Everyman for London.

But the party does not end well and he is confronted by God, depicted as a cleaning lady complete with Marigolds. Most of us had been ignoring the lady (Kate Duchene) while she swept the stage as we were taking our seats. She introduces him to Death, and puts on his hazmat outfit and pursues Everyman while he confronts his past and his future. 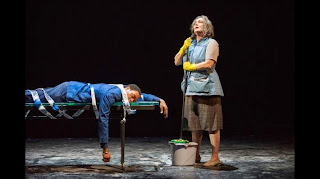 This new translation by the Poet Laureate Carol Ann Duffy is a filthy, gritty, expletive laden experience that knows how to relate to National Theatre audiences, since some of the original sins are replaced with ecology and the environment and other palatable causes. But the effect makes the work seem relevant and urgent. 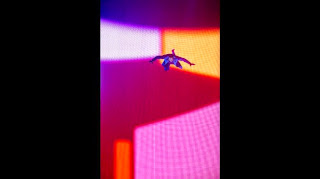 There is also a spectacular scene where Everyman’s encounter with a homeless man, Knowledge (played by Penny Layden). Sleeping rough in a part of SE1 that appears to evoke the old Cardboard City he tries to piece together what he can show of his life to God. Then Death brings forward a storm complete with wind machine that blows away the material possessions and money. At this point the audience also gets caught up in the gust of wind. Fake money and light debris showers into the audience. Getting blown away at the theatre never felt so real.

And with music by William Lyons underscoring the drama and a memorable performance by Sharon D Clarke as Everyman’s mother singing “Stormy Weather” it makes for unforgettable evening.


Everyman is playing at the National Theatre through to August. 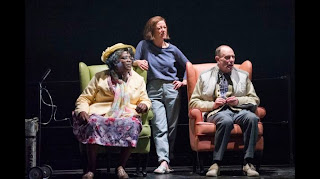